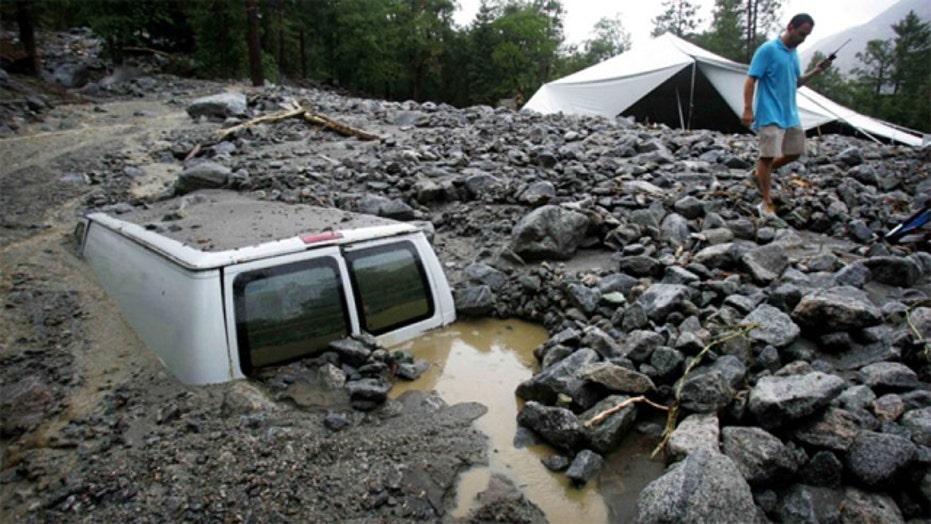 Crews cleared roads in an area where some 2,500 people had been stranded after thunderstorms caused mountain mudslides in Southern California, while authorities estimated Monday that between 6 and 8 homes were badly damaged and likely uninhabitable.

Traffic resumed on some San Bernardino County roads that had been blocked by several feet of mud, rocks and debris near two rural communities.

A group of about 500 campers who spent the night at a community center near Forest Falls headed down from the mountains after the main road reopened. An artery into Oak Glen, where about 1,500 people were stranded, was also open again.

Up to 8 homes near Forest Falls were "likely lost" and several others sustained minor damage from mud and water, Fire Capt. Jeff Britton said. At least 1,000 residents were unable to leave the area overnight.

Everyone in the two towns was accounted for and no injuries were reported, officials said.

To the west, coroner's officials identified Joo Hwan Lee, 48, of El Segundo as the man who died in a car that was swept into a rain-swollen creek near Mount Baldy.

Residents of Mount Baldy awoke Monday to sunny skies and mud-filled streets. They swapped stories between drying out carpets and shoveling dirt from in front of their homes.

"The stream was a raging black torrent of debris and big logs and muddy, silty water," said Michael Honer, who watched the flood build over an hour from a friend's house up the road. "It was apocalyptic. ... It sounded like a cross between a railroad train and a jet engine."

The white Toyota Prius where the driver died was wedged in Bear Creek among boulders and a log. The windshield was shattered and the car was full of dirt.

The driver had been parked Sunday in Angela Batistelli's driveway when she returned home with groceries. Hikers frequently park there and she asked the driver to move.

Rain was falling hard when she carried some bags up to her house. She saw the Prius down the street; its taillights were surrounded by water and then it was gone in the roar of water filling the canyon.

Batistelli's car, a Toyota Echo, also washed away. It was found sticking straight up, its front end buried in the silt-filled streambed. Her 250 gallon propane tank was torn from the house and carried down the street.

The road leads the way to a hiking trail up Mount San Antonio, known better as Mount Baldy. At 10,068 feet, the barren peak is one of the tallest peaks in Southern California and is popular among hikers and skiers.

The creek, which hadn't run in the summer for two years, turned to a gusher of rocks and logs, jumping its banks and surging across the adjacent road. The gorge that had been 5 to 15 feet deep in places was filled to the banks Monday with rocks and silt and level with the road. Only a trickle of water remained.

Damage was visible everywhere. Fist-sized rocks and mud covered the streets. Boulders were piled beneath homes perched on the granite canyon walls.

A rock staircase leading to a home near the top of the road was covered in dirt and rock or torn out by the mud that flowed down the steep hillside. Dirt, logs and boulders were piled up against windows. A hot tub was coated in mud.

In the Angeles National Forest, a group of 4 or 5 people and a dog were airlifted to safety.

Monsoonal moisture brought brief but fierce storms to mountain, desert and inland areas. In and around Palm Springs, knee-deep water flooded city streets and stranded vehicles. In the city of Redlands, the storm downed a tree and knocked out power to a few neighborhoods.

The downpour dumped as much as 3 1/2 inches of rain on Forest Falls, and nearly 5 inches on Mount Baldy, the National Weather Service said.

Authorities said crews were assessing the extent of the damage.

Harsh flash flooding hit the same area 15 years ago, when landslides sent boulders and trees plowing through 15 homes and creekside cabins in Forest Falls in the summer of 1999. One person was killed and five others injured.

And in metropolitan Phoenix, a cable line fell across a stretch of freeway reopened Sunday, closing it for eight hours. The roadway reopened early Monday.

About a dozen family members camping in southern Utah escaped a flash flood moments before it washed away their tents and minivan, police said. Washington County Sheriff's Deputy Darrell Cashin says rushing water pinned the Las Vegas family against a sheer canyon wall about 1:30 a.m. Saturday. They were rescued about an hour later.