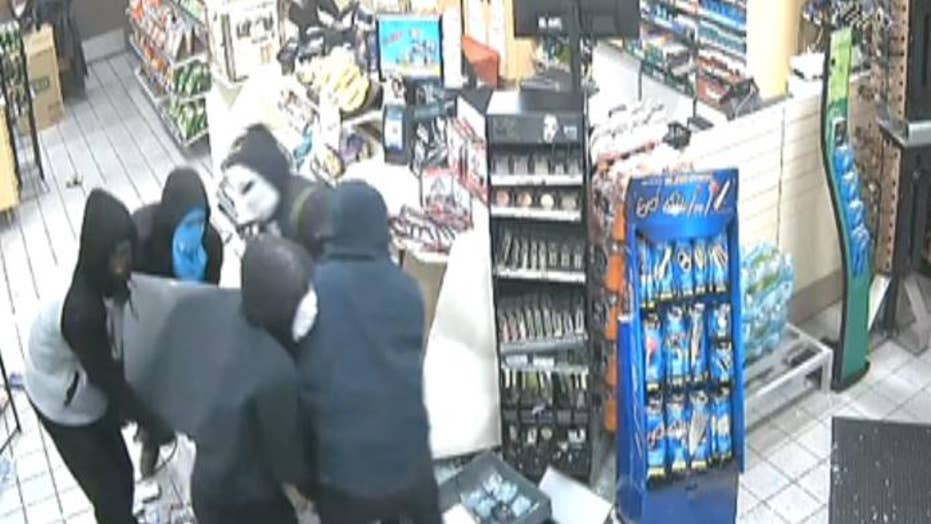 Five people used two vans to steal an ATM out of a 7-Eleven convenience store in Ohio early Monday morning -- and it was all caught in a dramatic surveillance video.

The video shows employee Jacob Kingan inside the store in Parma around 4 a.m. Monday when a van rapidly backs into the front, smashing the glass window and blowing the ATM across the store.

Seconds later, a second vehicle is seen driving up while five people, dressed in black and with faces covered, dash inside the store and drag the machine outside before driving away.

"I was just sitting there, counting cigarettes. It was about 4 am. And then out of nowhere, just BOOM! A van comes through and smashes the glass," Kingman told FOX8. "It only took a minute-and-a-half at most. They knew what they were doing. They all had hoodies, gloves, bandannas, they were ready, they were professional.”

News 5 reported the vans used were stolen before the dramatic theft.

“They stole it right out my driveway,” an unidentified Cleveland man told the station, adding that his van was left badly damaged at the 7-Eleven. “I have to deal with fixing my car. Now I’m stuck with a broken steering column. Hopefully, that’s all that’s wrong with it.”

The ATM had an undisclosed amount of money inside, police said.

Store manager Vikesh Kumar told News 5 that it’s the second time his store has been hit by smash and grabbers in fewer than nine months.

He said is contemplating not putting another machine up in his store.

“I would rather worry about keeping my employees safe than some customers not coming back,” Kumar said.