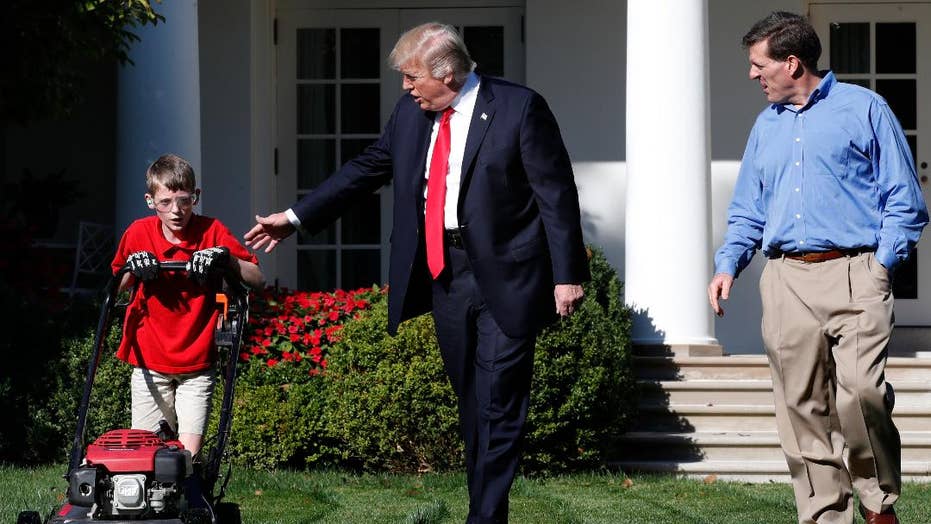 11-year-old Frank Giaccio mowed the White House Rose Garden lawn and didn’t stop working even as President Trump greeted him. Giaccio described his experience as “pretty much the best day of my life.”

Eleven-year-old "yard services entrepreneur" Frank Giaccio was in the spotlight Friday morning at the White House: The boy mowed the grass there after President Donald Trump invited him to do so.

Here's what I say: Kudos to this boy and his parents.

Several weeks ago, the Falls Church, Virginia, boy had offered to bring any type of mower the president preferred as well as extra gas for a lawnmower. He wrote to the president and said he had started his own lawn care business -- and wanted to become a better entrepreneur. He knew the president would understand.

What was Trump's response? Yup -- come mow my lawn!

The boy worked alongside the grounds crew.

On Friday morning, White House Press Secretary Sarah Sanders tweeted a photo of Giaccio as he went about his business. "Frank is hard at work in the Rose Garden and doing a great job!" she wrote.

To the surprise of many in the press as well as Americans across the country, Sanders said earlier this week at a White House press conference that "Frank from Falls Church, Virginia" would assist the White House grounds crew in its work in taking care of the Rose Garden grass.

In the boy's offer to Trump, he said it would be his "honor to mow the White House lawn."

Giaccio had also included a list of his services -- including weed-whacking.

As Giaccio told Fox Business Network's "Mornings with Maria" on Friday, "So far it's pretty much the best day of my life."

Offering to help out the leader of the free world takes some moxie. I don't think I could have done it at age 11 -- could you? How about your kids -- do they have the courage and spunk to stick their necks out and go for a dream?

If not, let us be reminded that helping our kids take healthy risks is really good for them. As this boy has shown us, it just might work. And if they fail? That's a win, too, because it's good for kids to develop tenacity and perseverance.

Dr. Meg Meeker has practiced pediatrics and adolescent medicine for more than 30 years. She is the author of the new book (Regnery Publishing, May 2017), as well as a number of and online courses, including The 12 Principles of Raising Great Kids.