The 'Outnumbered' panel reacted to Fox News revealing the State Department is funding drag shows for 'diversity and inclusion' to the tune of $20,000 and the broader impact of the Biden administration's handling of the border crisis.

A venue in Texas has canceled its remaining drag show performances for the rest of the year after claiming it was "bullied" with threats when footage went viral of one of their shows being attended by a child.

"The Island of Misfit Toys Drive and Drag Show" event that took place Friday at The Starlighter, a live music venue in San Antonio, was put on by the BIPOC alternative drag troupe House of Eternas and hosted by someone named "Miss Taint," according to an advertisement.

The event welcomed all ages and featured a screening of "Rudolph the Red-Nosed Reindeer," according to extensive footage recorded by journalist Tayler Hansen (WARNING: Graphic footage).

A rainbow flag emblazoned with "666" hung on the walls during the event, where performers danced suggestively to songs with lyrics such as "Under the mistletoe/ Yes, everybody knows/ We will take off our clothes." One of the performers was decked out in an apparent horned devil outfit.

VIDEO OF ALL-AGES DRAG SHOW IN FRONT OF CHILDREN IGNITES OUTRAGE: 'THIS IS CLEAR CHILD ABUSE'

Hansen's footage also depicted a young girl in attendance, who was seemingly by herself. Video shows one of the performers stroking the girl's hair, and audio has the sound of the girl interacting with one of the drag queens and saying her name is May.

The footage went viral and was met with backlash online, including from South Dakota State Republican Executive Committeewoman Christin Bentley, who tweeted that it was "one of the sickest, most difficult videos to watch of them all."

TEXAS LAWMAKER PLANNING BILL TO BAN CHILDREN FROM DRAG SHOWS: 'NOT APPROPRIATE AT ALL'

The Starlighter released a statement on Instagram earlier this week following the backlash, explaining how an inundation of threats has led it to cancel any additional all-ages drag show toy drives this year.

"The Starlighter's goal has always been to provide a safe all ages space for entertainment," the establishment said in the statement. "Unfortunately, we're now being made to feel unsafe in our own space. We're being bullied and threatened by both online and comments, reviews [and] tweets.

"For the safety of our queen staff and patrons we're canceling all of the drag events for the remainder of the year. This was a decision made between the queens and the Starlighter owners as a safety measure [and] nothing more," the venue's statement added.

"The child in question was never left unattended or in any danger," the venue further explained. "They are the child of our food vendor that night who was right outside the door. This vendor and their child are very familiar with both staff and queens, and even posted a picture thanking the queens for treating her ‘like a niece’ at the end of the event."

The venue further maintained that the event "was being twisted into something disgusting to fit a political narrative."

TEXAS LAWMAKER ON ARMED ANTIFA MEMBERS SHOWING UP AT ‘KID-FRIENDLY' DRAG SHOW: 'THEY WANT TO INTIMIDATE'

Hansen also recorded viral footage in August of a drag show in Roanoke, Texas, that was guarded by armed members of Antifa. 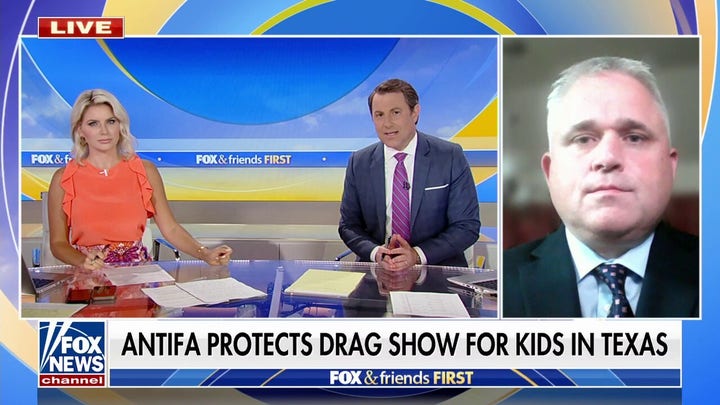 "We have a lot of laws to protect kids in Texas," Slaton told "Fox & Friends First" at the time. "We don't let them get tattoos. They can't go in sexually oriented businesses. They can't go in liquor stores. And then, of course, children need to just grow up and be children. They don't need to be sexualized. They don't need to be presented with this where they're putting money into men's underwear. It's just not appropriate for children at all."

Jon Brown is a writer for Fox News Digital. Story tips can be sent to jon.brown@fox.com.