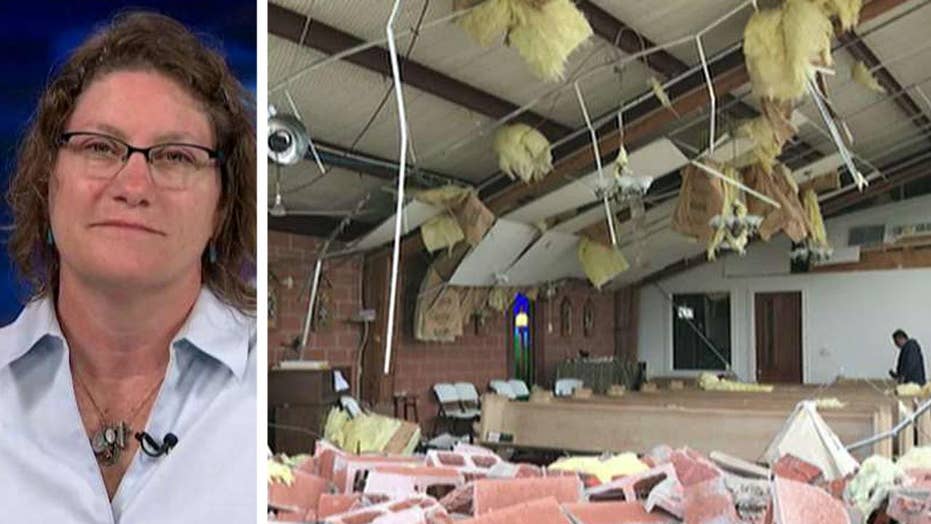 One of the parishioners who survived without a scratch after a tornado destroyed much of their church in Texas said Tuesday the “grace of God” saved them all.

At least 16 people were killed when several tornadoes slammed small towns in the South and Midwest.

About 50 people were at St. John’s Evangelical Church in Emory when they were alerted of the storm’s path. They took shelter inside one of the church’s hallways.

“There’s no doubt: Christ was leaning over us, protecting us, helping us hold the doors closed to the hallway we were in [and] telling us that it was going to be OK – that he had us,” Monica Hughes, a volunteer at the church, said on “Fox & Friends”.

“We were in the one space in that building that was not fully exposed to the outside when it was over,” she added.

The walls and roof at the small church were destroyed by the powerful storm – except for the small hallway they took shelter.

“When the storm hit… the pressure dropped until your ears popped. The air got very thick, it was difficult to breathe,” Hughes said. “The roof came off in one big sheet and then things just were flying, smashing into the doors and the walls.”

The outbreak that began Saturday over much of the Midwest and South included at least four tornadoes in Texas and severe flooding after more than a foot of rain fell in parts of Missouri. The storm even spawned a rare mid-spring snowstorm in Kansas.

It's not over yet. More flooding and tornadoes are possible as storms roll eastward in a band stretching from Alabama into the Ohio River valley. A wind advisory was in effect over much of the South. Parts of the Florida Panhandle could be affected by severe thunderstorms or high winds and dangerous rip currents.