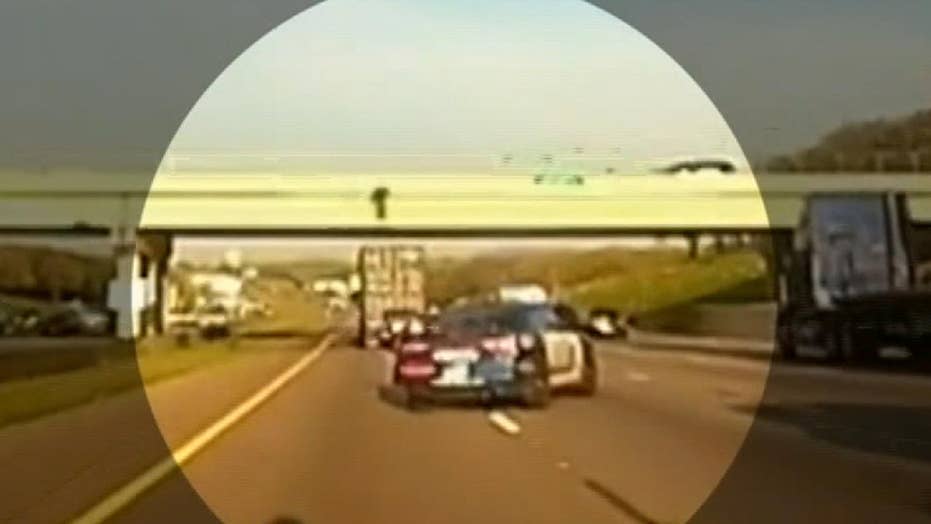 A police officer and truck driver in Texas are being hailed as heroes after helping to save a boy who was threatening to jump from a bridge during the morning rush hour on Wednesday.

The Arlington Police Department said in a Facebook post the incident happening at the Kelly Elliott Road bridge over Interstate 20 after authorities were alerted about a teenager who was contemplating jumping.

"We wanted to highlight a call where Motor Officer Deric Sheriff came up with an ingenious plan to assist during a crisis intervention this morning," the department said.

Sheriff, a 17-year veteran of the department, was working a traffic stop nearby when he heard the call and rushed to help. As Sheriff and another officer tried to stop traffic on the busy highway, he directed a big rig to stage under the overpass.

“I was trying to find a tall enough semi-trailer that would work because there were a couple of flatbeds that would not have been of any use,” Sherriff told FOX4.

The officer was looking to reduce the likelihood that the teen would be seriously injured if he jumped by positioning several trucks with trailers under the bridge.

A police officer in Texas directed a semi-truck to under an overpass on Interstate 20 where a teenager was threatening to jump. (Arlington Police Department)

Body camera footage released by the department showed Sheriff's exchange with Dwayne Crawford, the driver of an 18 wheeler.

As the first big rig was getting into position, the teen jumped and landed on top of the trailer.

“I feel good about it,” Crawford said. “The young man’s going to get help. The bottom line: he needed help.”

"APD Motor Officer Deric Sheriff was instrumental in directing the truck driver before the teen jumped & later landed on the trailer," he wrote. "Excellent crisis intervention to help this teen."

Sheriff, who has six children, told FOX4 his idea to save the teenager came from his previous job as a truck driver. He also said he'll never forget saving the boy.

“That’s the whole reason 99.9 percent of us got in this job is to make a difference and to help,” he told FOX4.