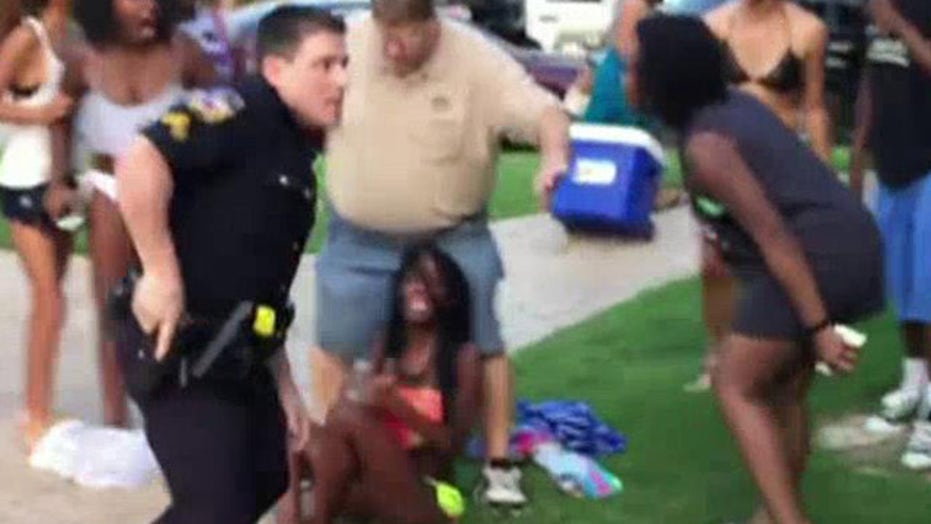 Officer placed on administrative leave while investigation plays out

A suburban Dallas police officer was placed on administrative leave over the weekend after video surfaced of him apparently pushing a teenage girl to the ground and pointing his gun at other juveniles.

McKinney Police Chief Greg Conley said at a news conference Sunday that the incident began when officers responded Friday evening to a report of a disturbance involving a group of juveniles at a neighborhood pool. The police department had said in an earlier statement that the young people did not live in the area or have permission to be there.

When officers arrived, residents and private security pointed out the juveniles who were "creating the disturbance, fighting and refusing to leave," Conley said. As officers dispersed the crowd, the 14-year-old girl was "temporarily detained" by an officer, said Conley, who did not describe what led to her detainment.

The video showed the officer pulling the bikini-clad girl to the ground then appearing to use his knees to pin her facedown. He can also be seen pointing his gun at other teens and cursing.

A link to the video is here (warning: very strong language).

The police statement said the video "has raised concerns that are being investigated" by the department. The officer is on leave pending the outcome, Conley said.

The Dallas Morning News identified the officer as Eric Casebolt, a corporal in the department's patrol division. Conley said he did not have information about how long the officer had been with the force.

One man was arrested for interference with the duties of a peace officer and evading arrest, Conley said. Everyone else was released.

McKinney Mayor Brian Loughmiller said in a written statement that he was "disturbed and concerned by the incident and actions depicted in the video." He called for the city and police to quickly investigate.

McKinney is about 35 miles northeast of Dallas.