Aerial footage of a 18 wheeler crash with 46 dead migrants found inside outside of San Antonio, Texas

Radio chatter from the scene where dozens of migrants died in an abandoned tractor-trailer in San Antonio, Texas reveal how an officer who encountered the scene called for help as he faced "too many bodies."

The abandoned vehicle was discovered on Monday on a desolate road, with dozens of migrants packed inside in the baking Texas heat. Authorities found 48 migrants deceased at the scene. The other 16 were transported to local hospitals, where five died.

In police audio provided by Broadcastify, an officer who encountered the scene can be heard requesting help.

"Can I also get one more here, I have too many bodies," he says.

An ambulance leaves the scene where police said dozens of people were found dead in a semitrailer in a remote area in southwestern San Antonio, Monday, June 27, 2022.  ((AP Photo/Eric Gay))

Officers can be heard looking for a heavy set Hispanic male, possible wearing a brown shirt.

Another officer later calls for more help: "Everyone on scene including my DIs are tied up with approximately 20+ victims." 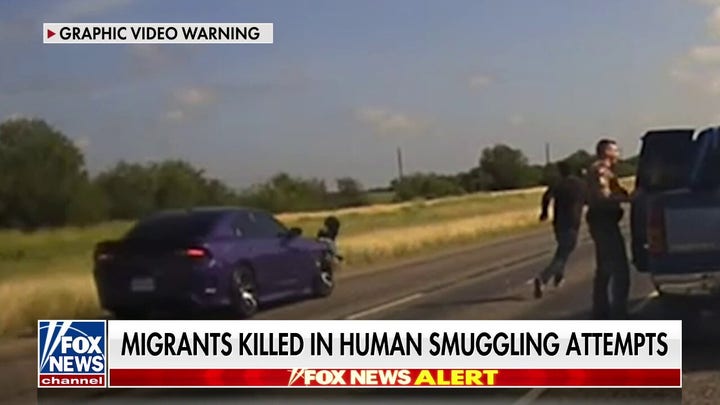 Four men have since been arrested in connection with the incident. The alleged driver of the truck, 45-year-old Homero Zamorano Jr., is facing one count of alien smuggling resulting in death and faces life in prison or the death penalty if he is convicted.

MULTIPLE MIGRANTS KILLED IN TEXAS DURING HUMAN SMUGGLING ATTEMPTS AT SOUTHERN BORDER, ONE CAUGHT ON VIDEO

Zamorano was found hiding in the brush near the truck on Monday evening after trying to get away from authorities, the U.S. Attorney said. Border Patrol agents later provided surveillance footage of a man matching Zamorano's description driving the truck through a Laredo Sector checkpoint.

The incident highlighted the dangers of human trafficking operations at the southern border, where migrants regularly lose their lives as they attempt to enter the country illegally while being smuggled by gangs and cartels.

Texas' Department of Public Safety (DPS) announced Thursday that at least four migrants have been killed in a deadly vehicle crash by a smuggler in Laredo. The driver was evading law enforcement and crashed into the back of a truck; he was smuggling six migrants.