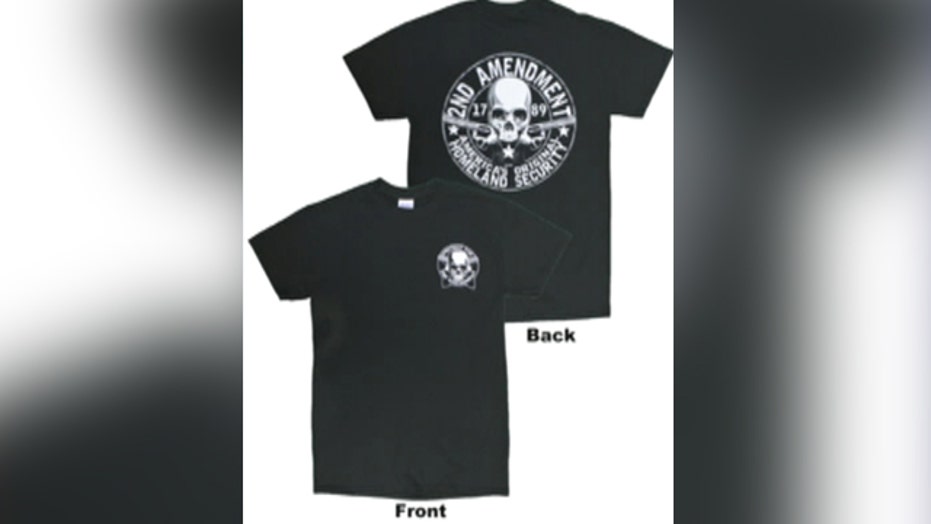 A Texas man says he got shot down when he tried to cast his ballot on the first day of early voting in the Republican primary because he was wearing a T-shirt in support of gun rights.

Chris Driskill says he went to his polling place last week but was prohibited from voting because he was wearing a black T-shirt with a logo on the front and back reading, “2nd Amendment -- America’s Original Homeland Security, ” KHOU 11 News reported.

The words encircle a skull and crossbones where the “bones” are short-barrel pistol grip shotguns.

"I heard a gentleman's voice over my shoulder say ‘he can't vote with that shirt on. You'll have to either turn it inside out or you'll have to leave,’” Driskill said of his polling place encounter at the Walker County Courthouse in Hempstead, a Houston suburb.

"I didn't quite understand it at first,” he told the station. "I was thinking they just didn't like something about the Second Amendment."

Driskill, who works as a security guard in Houston, apparently ran afoul of  Texas election law that bars campaigning for any “candidate, measure or political party” within 100 feet of polling place. His T-shirt could be construed as campaigning in support of gun rights under the law. Violators can be charged with a misdemeanor.

This year’s primary ballot happens to include a proposition asking for a yes or no vote on expanded support for the Second Amendment and the places where a concealed weapon can be legally carried. Primary early voting started Feb. 18 and runs to Feb. 28. The primary is March 4.

According to KHOU, Driskill was finally able to vote after he borrowed a suit jacket from a local Republican candidate outside the courthouse. He wore the jacket over his T-shirt while he filled out his ballot.

After he voted, he wasn’t too upset about what happened.

"If you have to turn around and go change shirts, you know, so be it,” he said. “But get out and vote.”