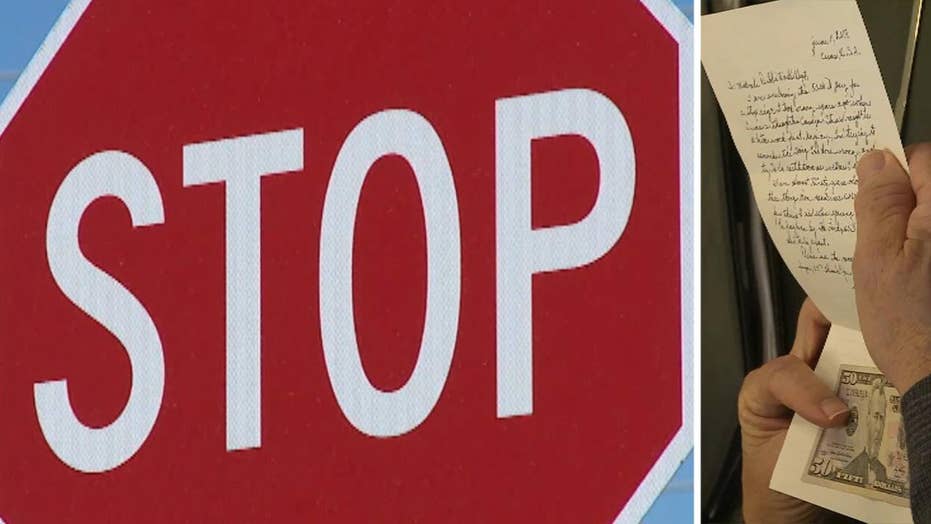 Mayor in Midvale, Utah surprised to receive letter with return address of 'a citizen of Texas' apologizing for stealing a stop sign when they were a 'thoughtless teenager' most likely in the 1940s.

A 90-year-old Texas man proved it's never too late to say sorry this week after mailing a handwritten apology note and a $50 bill to the public works department in Midvale, Utah.

The man, who only identified himself as a "sorrowful citizen," said he enclosed the cash to pay for a stop sign he stole decades ago.

"I am enclosing $50 to pay for this stop sign I stole when I was a thoughtless teenager," the man wrote. "Stupid might be a better word for it."

"All of these things have made me sorrow over the few things I did when I was young."

The elderly man from North Houston, Texas, said he has been "trying to do restitution" for all the mistakes he's made in the past.

"All of these things have made me sorrow over the few things I did when I was young," he continued. "I wish to be forgiven by the Lord, so I am sorry and truly repentant."

City officials were shocked by the gift — and wished they could thank the man in person, though the letter didn't include a return address.

While he doesn't know the man's name, he hopes the 90-year-old knows he's forgiven and can now live peacefully.

“He’s cleared it up a far as we’re concerned," Hale said, adding that he plans to use the man's donation to replace another stop sign in the city. "We can scratch out that line on the account receivable now."

Midvale shared the contents of the letter in a tweet on Wednesday.

"We received the sweetest anonymous letter from a 90-year-old Texas gentleman, and just had to share with y'all. #texas #BlessHisHeart," the city wrote.