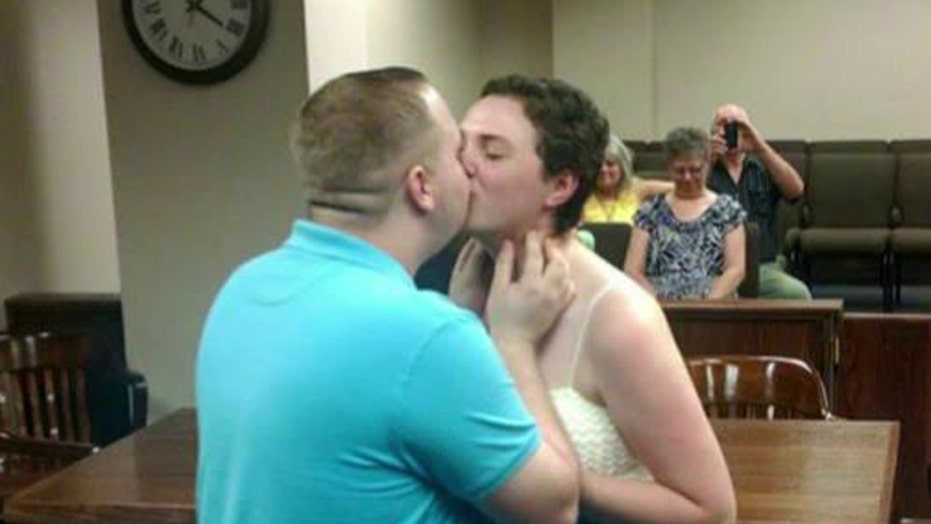 Texas man given choice to marry or face jail

A Texas judge decided to mete out justice in an unusual fashion when he offered a defendant up for sentencing in a minor assault case the choice of getting married or going to jail for 15 days.

“I just wonder what would have happened if Hannah said no, had we said, ‘you know judge, we would like to get married on our own terms,’” Bundy said.

Jaynes told KLTV their quicky courthouse wedding before a justice of the peace wasn’t the one she dreamed about when she used to watch the TV reality show about a bridal salon, “Say Yes to the Dress.”

“We weren’t going to be able to have the wedding we wanted,” she told the station. “It was just going to be kind of pieced together. I didn’t even have a white dress.”

Bundy was up for sentencing in July on an assault charge for belting his girlfriend’s ex in the jaw. He accused the former boyfriend of uttering insulting remarks about Jaynes.

Smith County Court Judge Randall Rogers asked the young man if she was worth fighting for.

Yes, he told the judge.

KLTV says a court transcript shows Rogers then offered to sentence Bundy to probation which would include marrying Jaynes within 30 days, attending counseling and writing bible verses. Otherwise he would sentence him to 15 days in jail.

“He offered me fifteen days in jail and that would have been fine and I asked if I could call my job [to let them know],” said Bundy. “The judge told me ‘nope, that’s not how this works.’”

“My face was so red, people behind me were laughing,” she said. “[The judge] made me stand up in court.”

They got married 18 days after the sentencing. The father of the bride was outraged that a judge could order someone to get married.

“I contacted a couple of lawyers but they told me someone was trying to pull my leg…that judges don't court order somebody to get married,” Kenneth Jaynes said.

The Associated Press tried to reach Rogers Friday but calls to his chambers went unanswered and calls to his home phone were met with recordings that he was not available.