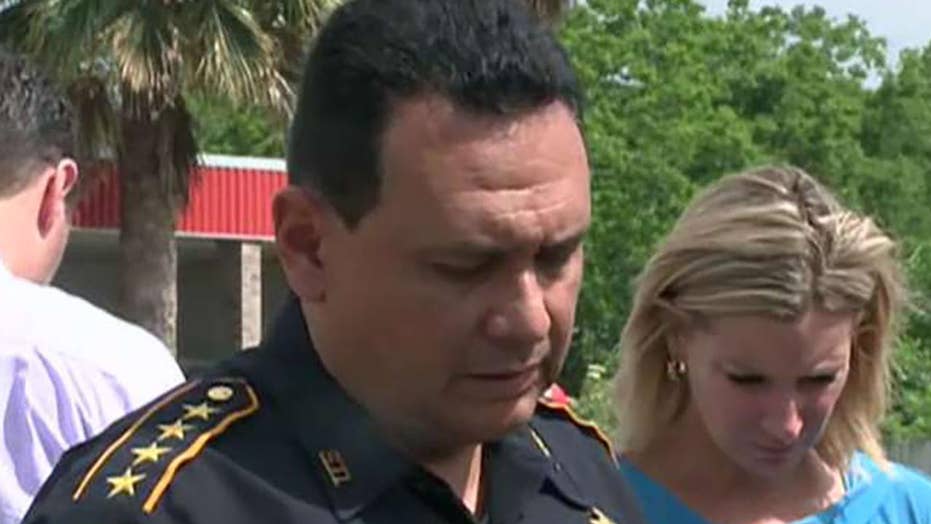 The suspect accused of unleashing a hail of bullets inside one of his classes early Friday morning that left up to 10 people dead and another 10 injured has been identified, reports stated.

Dimitrios Pagourtzis, 17, was identified as the person in custody in connection to the shooting at Santa Fe High School, The Associated Press reported.

Explosive devices were found at the school, authorities said.

The suspected shooter was taken into police custody and a second suspect has been detained. The suspect in custody and the suspect detained for further questioning were both students.

Trump: We grieve for terrible loss of life at Santa Fe High

Retired police officer John Barnes, working as the school's resource officer, was shot in the incident, Fox News has learned.

The chief nursing officer at the University of Texas Medical Branch told reporters the center received two adult patients and one person under 18 years old.

A 17-year-old student told Fox News her friend was shot in the leg.

"We all thought it was practice drill and we all started kind of running and laughing across the street, hiding behind the auto place. At that point, they had us starting to write our names on papers showing that we were there... and they had us walking over...," Destiny Clark, a junior, said as she pointed to stores. "It was very dramatic. Nobody really knew what was going on."

Two seniors at the school told KHOU 11 their friend pulled the fire alarm after spotting the shooter and urged other students to run. They also said they saw an injured female student.

“Now I am worried about everyone else,” one student commented. “I don’t even want to go to graduation now.”

The student said she did not get a good look at the shooter because she was running away. She said students escaped through a door at the back of the classroom.

Authorities have not yet confirmed these accounts.

A map showed the location of the school shooting in Santa Fe, Texas.

A parent of one of the students told Fox News they drove to the school immediately after hearing about the shooting.

Trump later tweeted that he "grieved for the terrible loss of life, and send our support and love to everyone affected by this horrible attack in Texas."

He also mentioned the school shooting during a speech at the White House Friday.

“Unfortunately I have to begin by expressing our sadness and heartbreak over the deadly shooting in Texas,” he said. “We send prayers and support for everyone affected in the horrific attack.

A suspect was taken into police custody and a second suspect was detained following the shooting. (AP)

Trump spoke with Texas Gov. Greg Abbott to "offer his condolences for those affected by the shooting at Santa Fe High School," an official told Fox News.

Gov. Abbott ordered flags in Texas lowered half-staff in memory of those killed in Friday’s shooting.

Students were evacuated from the school following the school shooting.

The U.S. Bureau of Alcohol, Tobacco, Firearms and Explosives (ATF) said it was also on the scene. Harris County Sheriff Ed Gonzalez tweeted early Friday that he arrived at the school to assist officers with the Galveston County Sheriff Office.

Santa Fe is a city of about 13,000 residents, located 30 miles southeast of Houston. The incident is the nation's deadliest school shooting since the February attack in Parkland, Florida, that killed 17 people.