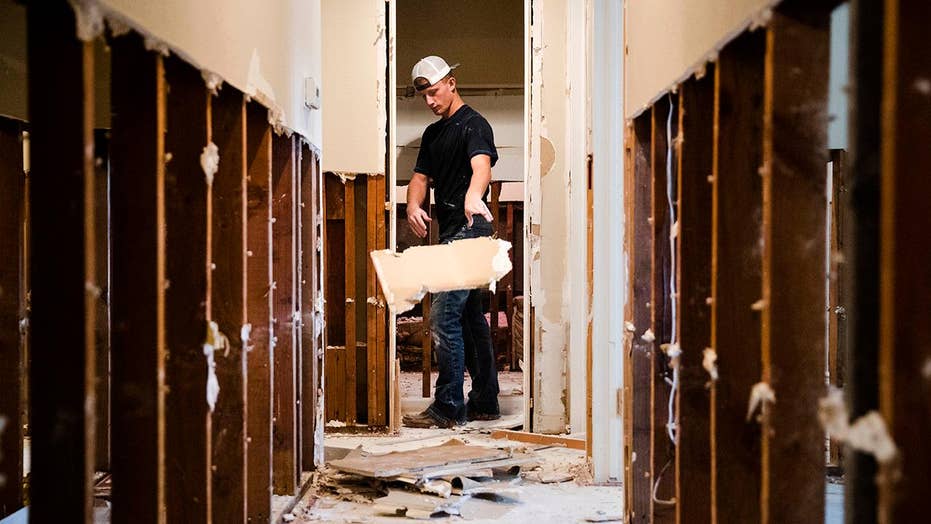 Will Carr assesses the damage in Houston

The heroic images of first responders and volunteers rescuing Texas flood victims overshadowed a little known group of rescuers who were not saving lives, but struggling to honor those lives already lived.

While more than 60 confirmed deaths resulted from Hurricane Harvey, flooded funeral homes and cemeteries raised a new issue: how to treat the already dead with integrity.

According to Michael Land, past president and spokesman for the Texas Funeral Directors Association, numerous funeral homes had to rescue bodies from coolers when the power went out.

At the same time, he said, others were flooded and required more aggressive responses, although he didn’t specify what they were.

He said the state had numerous volunteers to address the issue of protecting and preserving the bodies that were impacted at those funeral homes.

In addition to the funeral homes, the Medical Examiners offices in Galveston and Houston were overwhelmed with bodies – both from the hurricane and those that could not be sent to local funeral homes.

“We had two large cooler trailers deployed to assist the Medical Examiner offices to assist with their overflow,” Land said.

Land said he does not have the number of bodies that had to be redistributed.

Another concern was the impact of flooding on cemeteries. Land said that there has not been any displacement of caskets reported yet at Houston area cemeteries, but there is concern especially in the Beaumont, Texas area along the overflowed Sabine River.

“There are a lot of old country cemeteries along the river and historically, in past bad storms such as Hurricane Katrina, caskets and vaults have come up from the ground,” Land said.

He added that officials are going to have to wait for the waters to subside to get a better idea of the impact on cemeteries, many of which are still underwater.

The Texas Funeral Commission said it will be taking a “wait and see” approach to inspecting the funeral homes and cemeteries.

“There are still many impassible roads and I don’t want to put my staff in jeopardy,” said Janice McCoy, executive director of the Texas Funeral Service Commission.

McCoy said there have been past hurricanes where caskets and remains have floated to the surface. In that case, the respective county takes the point position in collecting the remains, then it is up to the funeral directors to determine where they belong, a most daunting task.

She said six Houston-area funeral homes have already applied for temporary operating permits, which would allow them to conduct body preparation and services at another facility.

“I suspect we can even get applications for operations to be held in RVs and mobile homes,” she said, which would be granted only if all criteria could be satisfied.

Gregory Cantue’s Mercy Funeral Home in Beaumont, Texas suffered damage to his roof and no major flooding but still has been confronted with his own unique set of complications.

“We’re having problems with returning family members who have died after they were evacuated,” Cantue said. “We’ve had two in Dallas and one who is expectant in Louisiana.”

Over the past two weeks, Cantue said he needed large 4x4’s to pick up deceased people at homes and hospitals because the flood waters had prevented burial.

Now, with the waters receding at some of the cemeteries, he said the ground is still heavily saturated so the caskets are immediately placed in the ground at the time of burial, as opposed to the usual digging the hole earlier in the day, which would now likely collapse.

Warren Claybar’s family has been in the funeral industry in southeast Texas for three generations and has endured major hurricanes, especially Ike, Rita, and now Harvey. He said each hurricane has its own quirks but one common denominator is the challenge of recovering the deceased after they were evacuated. Another problem can be dealing with families who have lost all their belongings – and now a family member as well.

“We met with a family this morning who just lost a family member and we said we could do a slide show of photos,” Claybar said. “They told me that would be impossible since they lost everything in the flood.”

Claybar said another issue in regard to the cemeteries that need to be stabilized is the displaced workers who had to be evacuated.

“That also hit us hard with the evacuation of our cemetery staff,” Claybar said. “We are slowly starting to resume services again.”