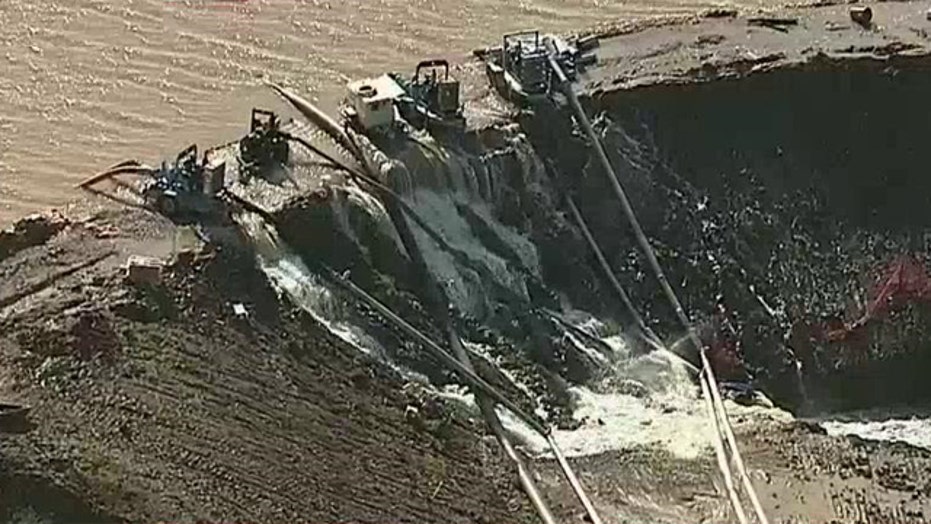 At least 17 dead in floods in Texas and Oklahoma

An earthen dam near Dallas that was on the brink of collapse Wednesday following heavy rains and deadly flooding is expected to hold for another day as engineers say the lake's water volume has significantly decreased, Fox4News.com reported.

Officials had been warning residents and farmers to get to high ground as they worked frantically to pump out lake water and ease pressure on the earthen structure. City engineers re-evaluated the dam in the town of Midlothian and determined that it is more stable than earlier believed.

"The previous reports of an imminent breech have now been… we're standing down basically," said Captain John Spann with the Midlothian Police Department.

There was earlier fear that the dam would fail and send a wall of water down Highway 287 in Ellis County and affect about 25 homes, Fox4News.com reported.

The report of the compromised dam in Midlothian, which is on Padera Lake about 25 miles southwest of Dallas, came as the statewide search continues for 11 people. The death toll from the Memorial Day weekend storms reached 19 in the U.S. after two more bodies were recovered Wednesday in Houston. There were 14 deaths in Mexico.

The historic storms over Memorial Day weekend, which dumped up to 10 inches in the span of hours in some areas, has prompted new scrutiny for Texas' storm warning system as officials continue to search for 11 missing from the Texas town of Wimberley.

The victims included a 14-year-old who was found with his dog in a storm drain; a high school senior who died after her car was caught in high water; and a man whose mobile home was destroyed by a reported tornado.

In Houston, floodwaters affected virtually every part of the city, paralyzing some areas. Firefighters carried out more than 500 water rescues, most involving stranded motorists. At least 2,500 vehicles were abandoned by drivers seeking higher ground, officials said. Mayor Annise Parker said two people who capsized in a boat that was helping with rescue efforts Tuesday have not been found.

A spokeswoman for the flood district of Harris County, which includes Houston, said up to 700 homes sustained some level of damage. Officials told the Houston Chronicle late Tuesday that flooding had overwhelmed a wastewater treatment plant in the city, causing more than 100,000 gallons of wastewater to spill out.

Texas Gov. Greg Abbott said that he had declared a disaster in 46 counties, adding that damage from the flooding stretched "from the Red River to the Rio Grande." President Barack Obama has said he expressed condolences to Abbott and anticipates significant requests for federal assistance.

In Wimberley, located between Austin and San Antonio, the usually calm Blanco River swelled to an ocean-like squall that crested above 40 feet, more than three times above its flood stage of 13 feet. The river swamped Interstate 35 and closed parts of the busy north-south highway. Rescuers used pontoon boats and a helicopter to pull people out.

Officials in Hays County said that the bodies of two men and one woman had been pulled from the Blanco as of late Tuesday. Their identities had not been confirmed. Eight of the 11 people who remain missing from the area were in a vacation home that was swept away and slammed into a bridge downstream. Two 6-year-olds and a 4-year-old were among those inside. They have been missing since early Sunday morning.

Meanwhile, authorities defended their alerts to residents ahead of the weather, which included alerts via phone and in person, but acknowledged challenges with reaching tourists and said a messaging system in Houston is still waiting for improvements.

"Nobody was saying, 'Get out; get out; get out,'" said Brenda Morton of Wimberley, who lives three houses down from the home that was swept away. "We're pretty trained, so we were calculating. We knew the flood plain. People who were visiting or had summer homes, you have company from out of town, you don't know. You don't know when that instant is."

Authorities in surrounding Hays County said warnings included multiple cellphone alerts and calls to landlines. Some received in-person warnings to evacuate, but officials could not say whether those in the washed-away home talked to police.

"Law enforcement made notification along that street. Whether they made contact with somebody at their residence, I can't say," Hays County Emergency Management Coordinator Kharley Smith said.

Wimberley, a popular bed-and-breakfast getaway near Austin surrounded by wine vineyards, thrives on weekends like Memorial Day. Some of the missing had homes in the area, but officials have acknowledged that their electronic alerts may not reach tourists.

"Most definitely, most definitely that will certainly be part of our discussion," Hays County Commissioner Will Conley said.