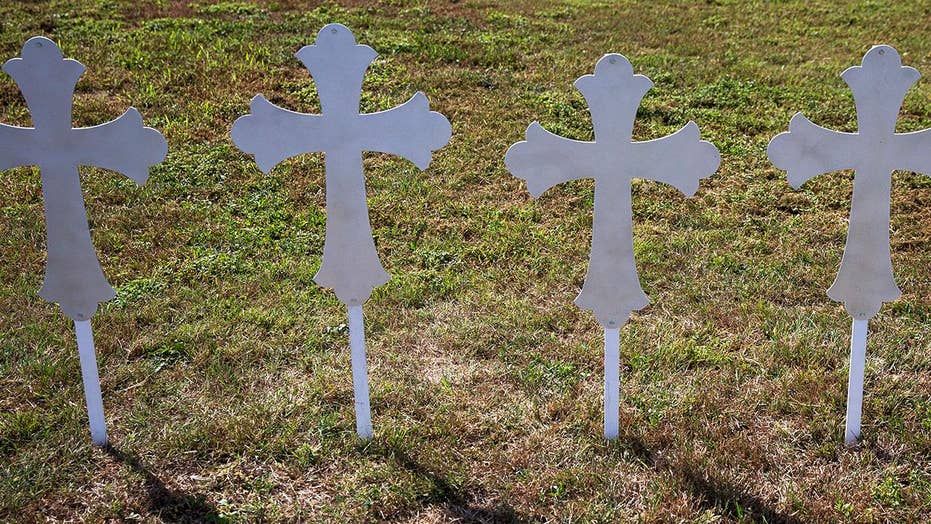 Las Vegas and Sutherland Springs: A tale of two massacres

In 24 hours, investigators in Texas have unearthed extensive background info on church shooter Devin Patrick Kelley and seem to have theories on motive, while the motive in the Las Vegas massacre remains a mystery a month later. #Tucker

Shocked former classmates who attended middle and high school with Texas church gunman Devin Patrick Kelley described him Monday as being heavily medicated and someone who kept to himself -- despite a deluge of posts on his apparent Facebook profile about weapons and atheism.

Kelley -- dressed entirely in black and "wearing a face mask with a white skull on it," according to Texas Department of Public Safety's regional director Freeman Martin -- burst into the First Baptist Church in Sutherland Springs, Texas on Sunday and killed at least 26 people, one as young as 18-months old.

A former middle school classmate told Fox News that Kelley would complain about his parents and medications during school.

“His parents had him on high doses of ‘psych’ meds from 6th to 9th grade, the time I knew him,” said the student, who only wished to be identified as Reid.

The student also said Kelley often posted on his Facebook page about his assault rifle and atheism, and that “a lot of friends quit talking to him by senior year.”

Courtney Kleiber, a New Braunfels High School student who identified herself as Kelley’s “best friend for a number of years,” said in a Facebook discussion about the shooting that Kelley once was heavily involved with the First Baptist Church.

The Texas governor details the latest in the investigation on 'Fox & Friends.'

“I was his best friend for a number of years and he was a happy, caring person back then. It's crazy what time and [mental] illness can do to you,” she wrote.

“Great, now I can't even look through my senior yearbook without seeing this,” she posted on her Facebook page late Sunday, next to a picture of her and Kelley.

Another classmate who spoke to Fox News and wished to remain anonymous described Kelley as a quiet student, though he had his share of friends.

“He recently added me on [Facebook]. I accepted hence we went to school together, and any time I saw him on my timeline he was sharing stuff about guns and being atheist,” she said. “He was pretty negative. The last post I remember was of a rifle.”

Chatter amongst other students on Facebook who say they knew Kelley suggested he had a volatile relationship with his parents.

One student said Kelley used to tell her about issues with his dad, while another said they watched Kelley verbally abuse his parents.

Kelley was also a member of his high school’s football team, Reid said. One student said Kelley’s father would go “crazy” if Kelley messed up on the field.

Investigators work at the scene of a deadly shooting at the First Baptist Church in Sutherland Springs, Texas, Sunday Nov. 5, 2017. (AP)

Brittany Adcock, a 22-year-old who told NBC News that she dated Kelley for two months when she was 13 and he was 18, said Kelley would constantly call her after she broke off the relationship.

"He would offer me money to hang out with him quite a bit. There has been one point that I called the police because he was just calling me so much I wanted to report harassment," Adcock told the network. "One time he told me I should move in with him and his wife and that he would take care of me as long as I walked around topless."

Kelley had previously served in the U.S. Air Force, and was stationed at Holloman Air Force Base in New Mexico from 2010 until his discharge in 2014, an Air Force spokesperson confirmed to Fox News.

He was court-martialed in 2012 for assaulting his wife and his child, and later received a bad conduct discharge from the Air Force, in addition to confinement for 12 months, and was reduced in rank.

Investigators work at the scene of a deadly shooting at the First Baptist Church in Sutherland Springs, Texas, Sunday Nov. 5, 2017. (AP)

Texas Gov. Greg Abbott on Monday said there was a connection between the "very deranged individual" and the church where the slayings took place, telling "FOX & Friends" that people will learn about a link.

"I don't think the church was just randomly attacked," he said. "I think there was a reason why the shooter chose this church."

The gunman was also denied a Texas gun permit, according to Abbott.

"He was rejected either because he did not fully answer all the questions that are required to get a Texas gun permit, or he answered those questions wrong, that we still don't know," he said.

Wilson County Sheriff Joe Tackitt told Fox News that Kelley's former father-in-law did attend the First Baptist Church, but he and his wife were not there Sunday.

His ex-mother-in-law’s P.O. Box was also listed as having a mailing address in Sutherland Springs, the Daily Beast reported.

Kelley previously registered to vote in Colorado in 2014 and listed his address as a parking space in a RV park in Colorado Springs, according to the New York Times.

A woman who lived in the spot next to the address said a man of similar age and description lived in that space for a few months during that time, and that he had a pit bull puppy that was left tied up in the sun all day.

She told the New York Times that there was an incident where police were called because the man -- who she never learned the name of -- struck the dog in the head, leading to a standoff with police in which the man refused to come out of his trailer for an hour.

Records show Kelley was charged with cruelty to animals in August 2014 but the case was dropped, the New York Times reported.

Kelley worked as a security guard for a Texas waterpark this past summer, according to a resume under his name that appeared online.

The suspect, who is from New Braunfels, a suburb outside San Antonio, was found dead in his car after he sped away from the scene of the shooting and was chased by two Good Samaritans.

Tackitt told Fox News on Monday authorities believe the gunshot wound that ultimately killed Kelley was "self-inflicted," however, there was also an exchange of gunfire before and during the case.

"All I know is he stopped another resident right over here and said, 'Lets go we got an active shooter, we need to get him stopped,' and they were chasing him," he said. "They were shooting rounds at him and then he went off the road, we don't know if he was actually hit again or what, but wrecked out. He was from my understanding self-inflicted gun shot wound."