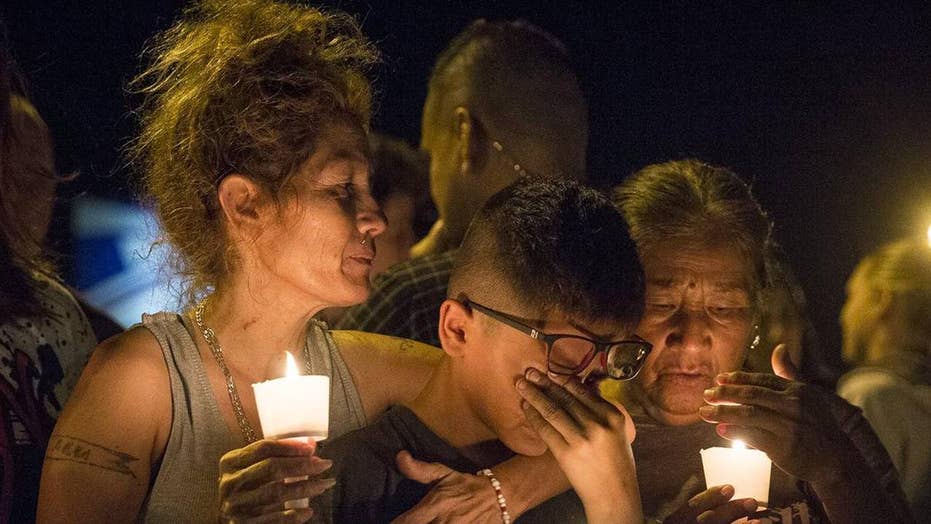 Did the system fail the victims of Texas church massacre?

Air Force admits it failed to report Devin Kelley's conviction allowing him to buy firearms; reaction and analysis on 'The Five.'

Devin Patrick Kelley attended a fall festival at the First Baptist Church of Sutherland Springs five days before he killed 26 people inside the church and wounded 20 others, the local sheriff said Tuesday.

Wilson County Sheriff Joe Tackitt said the church's pastor had told him Kelley's behavior did not raise any alarms.

"The pastor told me he was here at the festival Halloween night, saw him in the crowd," Tackitt told reporters. He did not say if the pastor provided any details on that visit, such as what the shooter was doing, whether he wore a costume, or anything else that stood out.

A friend of Kelley's mother-in-law told the San Antonio Express-News that Kelley attended the festival with his children.

Tambria Read added that people in the church were willing to help the man who killed so many of their fellow parishioners.

A photo album on the church's Facebook page shows children in costumes and face paint playing games. Kelley does not appear to be among those pictured.

Authorities believe that the shooting stemmed from a domestic dispute between Kelley and his mother-in-law, Michelle Shields. Shields sometimes attended services at the church but was not present on Sunday.

The report emerged the same day that a Pentagon official told Fox News that Kelley escaped from a mental institution in New Mexico near Holloman Air Force Base in June 2012.

The official said that Kelley had been sent to the institution while he was awaiting a military trial for an assault on his ex-wife in which he choked her and struck her son hard enough to fracture his skull. The reason Kelley was sent to the mental institution was not immediately clear.

After his escape, Kelley was found by police at a bus station in downtown El Paso. He was eventually discharged for the assault and served a year of confinement after a court-martial.

Kelley, who was 21 at the time, was also caught trying to bring guns onto the base when he was stationed there and had made death threats against superior officers, according to an El Paso police report obtained by several media outlets.