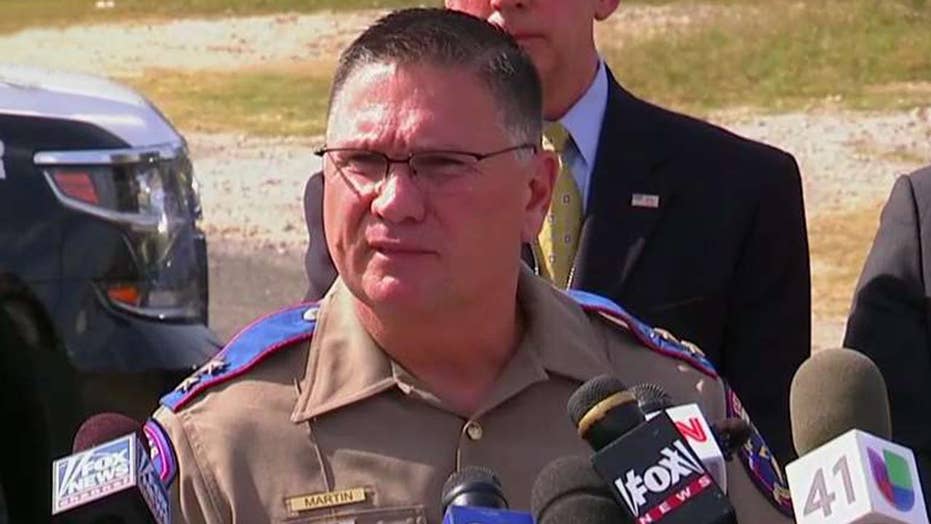 Texas Department of Public Safety's Freeman Martin answers questions submitted by the media on the investigation into the church massacre.

The phone used by the gunman who stormed into First Baptist Church on Sunday killing 26 people, including an 18-month-old and an unborn child, has been recovered and turned over to the FBI -- but encryption technology is preventing officials from accessing it, authorities said Tuesday.

FBI Special Agent in charge Christopher Combs said the phone Devin Patrick Kelley used to call his father during a high-speed chase after the rampage at the church has been sent to the FBI Academy in Quantico.

"Unfortunately, at this point in time, we are unable to get into that phone," Combs told reporters.

Combs, who wouldn't describe the type of phone Kelley had, said it highlights a bigger issue with new technology.

"Law enforcement, whether it’s at the state, local or federal level, is increasingly not able to get into these phones," he said.

Combs added: "We're going to keep working on that phone and other digital media we have."

An official with the Bureau of Alcohol, Tobacco, Firearms and Explosives said there was no evidence to suggest Kelley used a "bump stock" on his gun during the attack, a device used during last month's mass killing in Las Vegas.

ATF Special Agent in Charge Fred Milanowski added all indications are Kelley used a semiautomatic weapon, and that it will be test-fired to confirm. Agents processing the crime scene are also examining shell casings to see if they are related to any other crime scenes in the national database.

There is no reason to believe anyone else is involved in the crime, nor that it was motivated by religious beliefs, though Kelley was an atheist, according to Texas Department of Public Safety Regional Director Freeman Martin.

Martin said officials are still trying to determine if the gunman fired all 450 rounds from the 15 emptied 30-round magazines found at the church scene.

He also did not go into any other detail about previous threats Kelley texted to his mother-in-law, who attended the church but was not there Sunday at the time of the massacre.

"We have some indication on the conflict in the family," Martin told reporters, adding there was "still a lot of work to be done."

While officials in Texas did not discuss Kelley's bad conduct discharge from the Air Force, Defense Secretary Jim Mattis said Tuesday he has directed the Pentagon's watchdog to examine the circumstances of the Air Force's failure to report the Texas church shooter's domestic violence conviction to the FBI to "find out what's going on."

Under Pentagon rules, convictions of military personnel in crimes such as an assault should be shared with the FBI for its National Criminal Information Center database. Kelley was convicted of assault against his wife and stepson in an Air Force court-martial in 2012.

Four different witnesses told deputies in Colorado Springs that they saw Devin Kelley beating his dog while screaming at it, even as the dog cried.

Mattis said the Pentagon must make certain it's got "the right direction," and he must "define what the problem is."

"If the problem is we didn't put something out, we'll correct that," he added.

The gunman also escaped from a behavioral center in southern New Mexico months after the attack on his wife, according to documents obtained by Houston television station KPRC.

Kelley, who was 21-years-old at the time, was picked up at a bus terminal in El Paso on June 7, 2012, after two officers were dispatched to the terminal to look into a missing person report, KPRC reported. The documents obtained by the television station said Kelley had “suffered from mental disorders and had plans to run from Peak Behavioral Health Services.”

Bryan Llenas reports from Sutherland Springs on the latest investigation details and the Air Force's probe into why the gunman's history was not reported.

In addition to the assault on his wife, authorities in Comal County in Texas -- where Kelley lived -- confirmed to Fox News on Tuesday they are looking into a report of sexual assault where he was named as a suspect.

Sheriff Mark Reynolds said authorities checked for calls for service at his parent's address where he lived and discovered a sexual assault complaint from June 2013.

Officials at the time received a call about a sexual assault happening in the county with Devin Kelley named as the perpetrator and that was looked at by investigators until October 2013. The case eventually stalled at the time Kelley moved to Colorado.

Reynolds told Fox News the former administration handling the department and case retired, but authorities are reaching out to the victim of the 2013 incident in the wake of Sunday's massacre.

Fox News' Maggie Kerkman and the Associated Press contributed to this report.