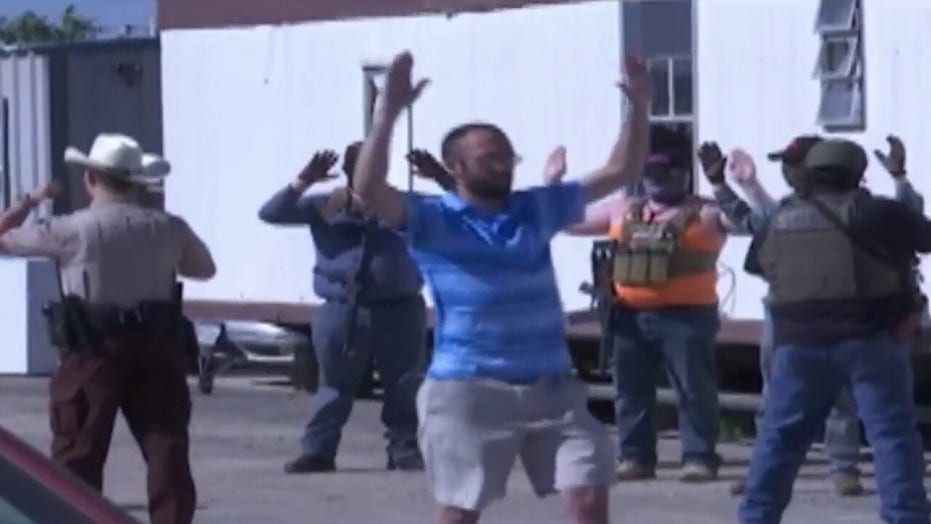 A Texas bar owner, along with six heavily armed men who said they were there to protect her, were arrested Monday following a brief standoff with police while they were protesting the state’s lockdown measures amid the coronavirus pandemic, officials said.

Gabrielle Ellison, 47, the owner of Big Daddy Zane's Bar in West Odessa, was arrested Monday and charged with a misdemeanor violation of Gov. Greg Abbott’s Emergency Management Plan after reopening her establishment, Ector County Sheriff Mike Griffis said. She was later released on a $500 bond.

Six men wearing armor and carrying “AR-15 type” assault rifles were arrested and charged with felony unlawfully carrying a weapon on a licensed premise. A bystander was also arrested for interfering with the duties of a peace officer, Odessa American reported. Eight people in total were taken into custody.

Ector County sheriff’s deputies and Texas state troopers responded to the scene. Authorities drove an Armored Personnel Carrier behind the bar before pointing their guns at the armed protesters, telling them to put their hands up, the newspaper reported. The armed men were then handcuffed and transported to the Ector County Detention Center.

More than 20 people participated in the protest at Big Daddy Zane’s Bar organized with help from Open Texas, an armed group that travels around the state trying to help reopen the doors of businesses that Abbott deemed “nonessential," according to The Associated Press.

The gunmen said the protest was peaceful and they did not plan on firing their weapons. They claimed they were exercising their Second Amendment rights to protect the bar’s First Amendment rights, the Odessa American reported.

"This was not a protest of their Second Amendment rights. It was a show of force to ensure this lady could violate the governor’s order," Griffis said in a news conference Tuesday, Fox 24 Odessa reported.

Bars were not cleared to resume operations under the First Phase of reopenings in Texas that began on Friday.

After the state’s stay-at-home order expired Thursday, some nonessential businesses, including retail stores, movie theaters and malls, were cleared to reopen at 25 percent capacity.

Restaurants were permitted to reopen their dining rooms, provided “less than 50 percent of their gross receipts come from the sale of alcoholic beverages,” Abbott's executive order said.

In a phone interview prior to her arrest Monday, Ellison told the Odessa American that her business is losing money and her employees have struggled since she was forced to shut down the bar. Ellison added that she has been paying her staffers with no assistance from the Paycheck Protection Program.

“I think some rights were taken away from us which one of them was like a right to survive. We have to survive and I think those rights were stripped from us,” she said.

Texas, as of Wednesday, recorded at least 33,369 confirmed coronavirus cases, with at least 906 deaths, according to the state health department.