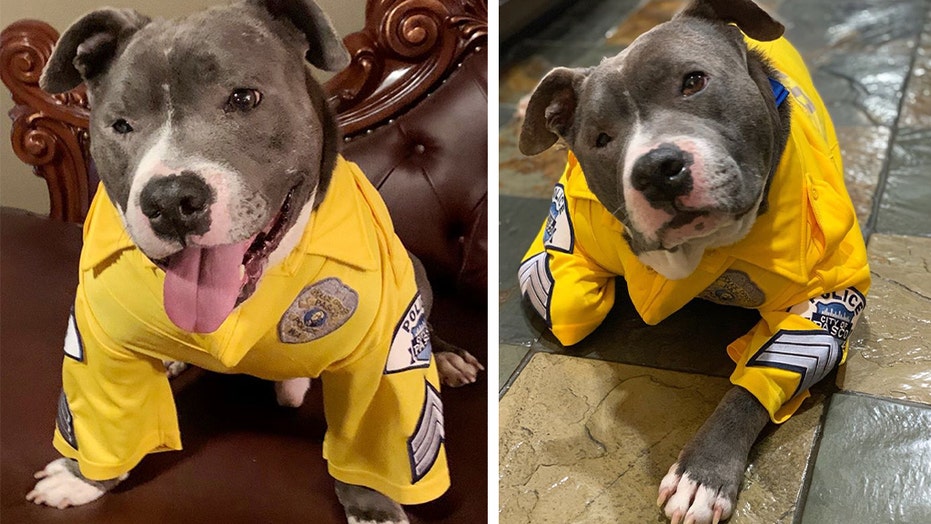 A terminally ill dog named Eddie fulfilled part of his bucket list Monday when he was named an honorary police K-9 for a Washington police department.

Dressed in a yellow Pasco Police Department K-9 uniform, the gray and white pit bull was sworn in and began his duties by visiting businesses to collect items to benefit a local dog rescue group.

"Eddie was welcomed everywhere he went and shown nothing but love and affection all day," the department posted to its Facebook page.

Videos posted to social media showed him being walked out of a PetSmart to applause from customers, greeting staff at a local dentist office and eating ice cream.

Eddie has an inoperable tumor and 6 to 12 months to live, said Mikey’s Chance Canine Rescue, which has cared for him in his final months. He was abandoned near Benton City in October and was found by an animal control officer, the Tri-City Herald reported.

The tumor was discovered during a visit to the veterinarian. Authorities reached out to the rescue group, which found Eddie a foster parent who came up with the idea for a bucket list.

Eddie lounges while surrounded by toys and police officers during his day as an honorary K-9 police dog.  (Pasco Police Department )

He's already checked off some other items, including staying at a pet-friendly hotel with ice cream and breakfast in bed, a spa day, riding in a convertible and having a paint party with "doggie friends."

He still needs to attend a baseball game, set up a kissing booth at a local adoption event and get dressed up and go out for Valentine's Day dinner.

The foster parent will help Eddie through his hospice care.