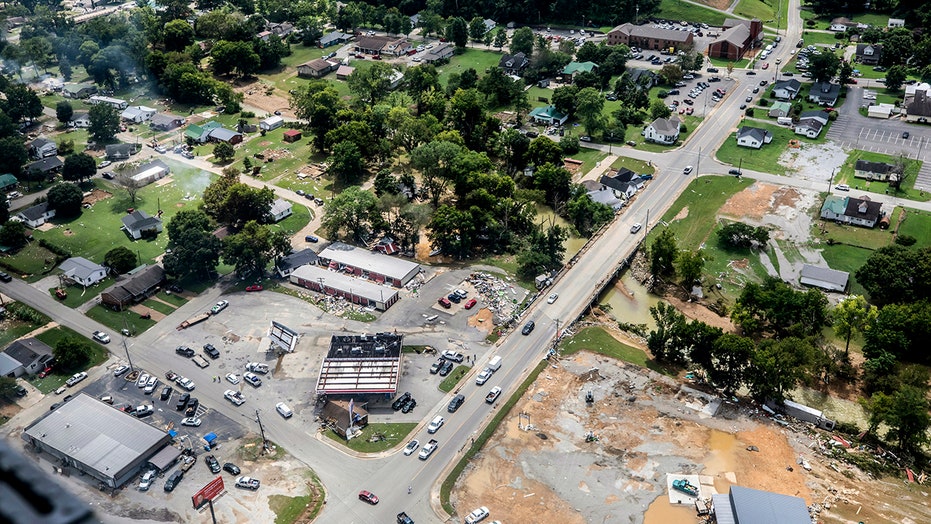 A desperate search in Middle Tennessee continues Monday for missing adults and children swept away in devastating floodwaters that left at least 18 dead after torrential rainfall pounded the region over the weekend.

Historic flooding on Saturday washed out roads, tore homes off their foundations, took out cellphone towers and telephone lines, and wrecked cars. In the wake of debris, families and friends grew frantic over the whereabouts of missing loved ones.

In Waverly, a city of 4,500 people in Humphreys County, officials released a missing person list of 37 names as of Monday morning, asking the public for help as crews continued "searching inch by inch, in and out of debris."

The dead included twin babies who were swept from their father’s arms, according to surviving family members, and a foreman at county music star Loretta Lynn's ranch. Many of the missing live in the neighborhoods where the water rose the fastest, said Humphreys County Sheriff Chris Davis.

"Water was gushing in. We tried to block the doors and it wasn't working. It was filling up and I told him don't panic. It's gonna be OK. I was leaving to go get help," the mother of the deceased twins told FOX 17 Nashville.

At least two other children were missing in Waverly after up to 17 inches of rain was dumped in Humphreys County in less than 24 hours Saturday.

Kellen Cole Burrow, 2, was swept out of his mother’s arms as raging floodwaters tore through their apartment.

"I couldn’t get back to him, but [his mother] managed to save our other four children," Kellen’s father Kalaub McCord told the news outlet. "If it wasn’t for her, I wouldn’t have any children right now."

One name on the missing person list was that of 15-year-old Lilly Bryant, who friends say just started her freshman year of high school.

"If we don’t find her tonight, we’ll be right back here in the morning as soon as daylight breaks to continue," family friend Chelsea Simons told the station. "We’re not gonna stop until we find their baby."

Tennessee Gov. Bill Lee toured the area, calling it a "devastating picture of loss and heartache." In a letter to President Biden, he asked the federal government to expedite a major disaster declaration.

"There are no words at the ranch today...only tears," Loretta Lynn wrote in a post on Facebook. "Our ranch family is our family. We lost my amazing ranch foreman, Wayne in this devastating flood."

The Humphrey's County Sheriff's Office set up a reunification center at McEwen High School. As searches stretched into Monday, officials believed that the number of fatalities could rise.

"I would expect, given the number of fatalities, that we’re going to see mostly recovery efforts at this point rather than rescue efforts," Tennessee Emergency Management Director Patrick Sheehan said.