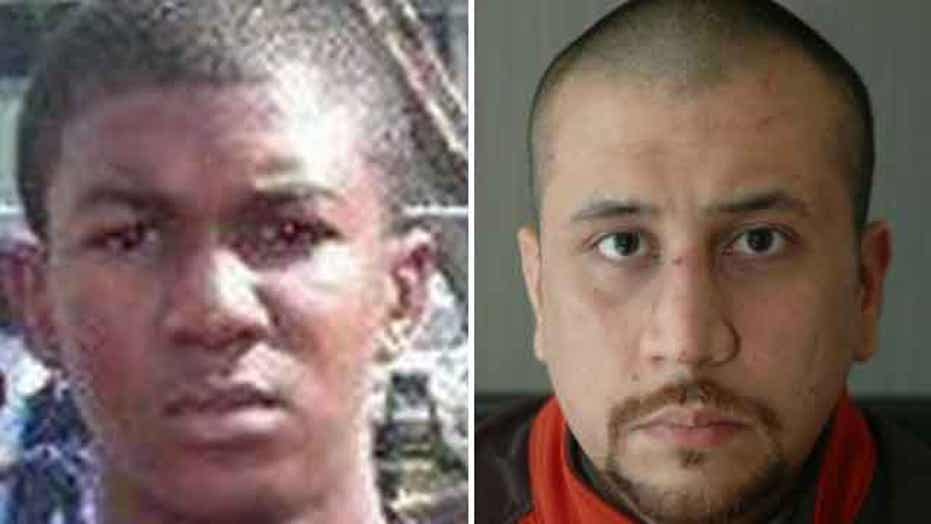 One year since shooting death of Trayvon Martin

The case of the Florida man accused of fatally shooting unarmed black teenager Trayvon Martin last year took two twists Tuesday at a monthly hearing attended by attorneys on both sides of the case.

The girlfriend, known as Witness 8 in court proceedings, is considered to be a key witness in the case because she alleges she was on the phone with Martin before he was killed.

In a recorded interview with the attorney for Martin's parents last March, the girl claimed Martin said during that conversation that someone was following him. She said she heard a brief exchange between him and someone before the phone was cut off. Martin was shot shortly afterwards.

The girl had previously said in a sworn statement that she was unable to attend Martin's funeral because she had been hospitalized, but it was revealed in court Tuesday she had "lied" about the visit.

"She, in fact, did not go to the hospital as she stated under oath," defense attorney Don West said, according to MyFoxOrlando.com. "And that [prosecutor] Mr. [John] Guy represented there would not be hospital records confirming her sworn statement, because, in fact, she lied."

Guy confirmed there were no hospital records for Witness 8.

O'Mara said he wanted to wait and take the girl's deposition later this month before commenting on whether her credibility could be an issue at trial.

"The state did what it was supposed to do and let us know there was a problem with their witness. We now know it and have an opportunity to talk to her," he said. "Credibility is always an issue with any witness. And if it rises to the level where it is evidentiary, then we'll go from there. And if it doesn't rise to that level, we deal with it."

O'Mara also said he won't need the two weeks a judge previously set aside for an immunity hearing under the state's controversial self-defense law, though the issue could be folded into the trial.

O'Mara previously stated that he hopes to wrap the "stand your ground" hearing into Zimmerman's second-degree murder trial, scheduled for June 10. He said that could still possibly happen and the judge has said she is open to it.

A judge would have sole discretion in an immunity hearing to decide if Zimmerman is exempt from culpability in the shooting. A jury would make the determination in the murder trial. O'Mara said after Tuesday's hearing that no decision about when he might file a motion for an immunity hearing is set in stone, though.

"I haven't made that decision yet. The real focus is going to be on getting ready for a jury trial," he said. "As you know, I've been counting. We're only at 96 days right now. So that only that only gives us time to really get ready for one hearing. And that's going to be a jury trial where he gets acquitted. So that's my plan."

"If we're going all the way through a jury trial, I look forward to a jury verdict."

Lead prosecutor Bernie de la Rionda declined comment on any specifics of the case, but did say he was "bewildered" about whether or not the defense intended to have a "stand your ground" hearing.

"My job is to try the case in the court," he said. "We'll let the witnesses speak when they tell the truth, under oath in a courtroom and let the evidence speak for itself."

Zimmerman, a 29-year-old former neighborhood watch leader, maintains he shot the 17-year-old Martin in self-defense only after they got into a fight in February 2012.

Prosecutors contend that he followed Martin and may have racially profiled the black teenager. Zimmerman's father is white and his mother is from Peru. Zimmerman has pleaded not guilty.

O'Mara said their options are still very fluid right now regarding the potential immunity hearing, but the defense team is putting its energy into trial because of finite funds and the judge is holding firm to the June trial date.

He said he thinks a jury verdict might also be more calming to the intense fervor around this case.

"We decided to focus on the idea that George wants to have a jury of his peers decide his case. And it's gonna be, I think, a more accepted result for everyone who has to accept the result -- that he gets an acquittal at trial," O'Mara said. "More so than an immunity hearing given by a judge."

The judge also decided to allow the defense to see copies of Florida Department of Law Enforcement biographical profiles which were done on multiple witnesses, including Martin and Zimmerman. Some confidential information, including addresses, social security numbers, and origin of some criminal records will be redacted, however.