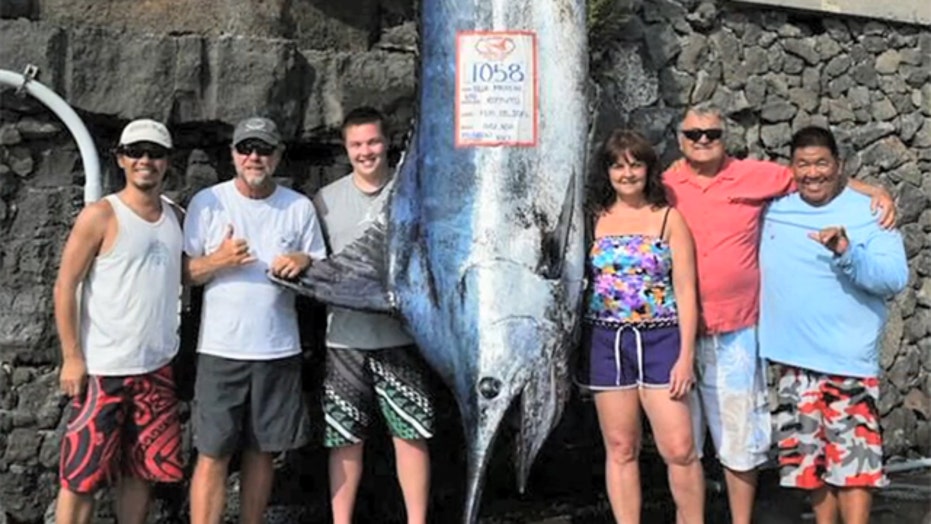 At 16 years old, Kai Rizzuto may have caught the fish of his life.

The teenager was fishing off Kona, Hawaii, on Wednesday when he felt a big tug on the end of the line. The teen grabbed his fishing pole and followed the line out about 100 yards from his charter boat and saw the monstrous, 1,058-pound marlin emerge from the blue Pacific.

He was buckled into the seat on the back of the boat and began what he later said was the biggest fight he's ever had reeling in a fish.

Rizzuto managed to pull in the massive marlin, known as a grander, after a 30 minute fight. He is thought to be one of the youngest fishermen to ever reel in such a monster fish.

Watch the GoPro video of the catch

"It was a 30-minute fight," he told HawaiiNewsNow.com. "I'll tell you, it was the hardest 30 minutes I've ever fought a fish. When I saw that fish at the end of line I was just thinking: don't break off; do not break off."

The marlin was caught on a green Koya Poi Dog lure that features a yellow shell and red eye that resembles a large squid.

The boat's crew talked Rizzuto through the ordeal. The fish cleared the water a few times but never got closer to the boat than 100 yards, FishTrack.com reported. The fish eventually rolled over. When it reached the boat, the crew tried to revive it, but the fish reportedly could not be saved.

The fish, which measured 11 feet from its bill to its tail, was dead after the struggle so the fish’s meat was set to be shared with the people in the area.

"My estimate is today there are over 100 people that are enjoying that fish,” Jim Rizzuto, the teen's grandfather, told the news site.