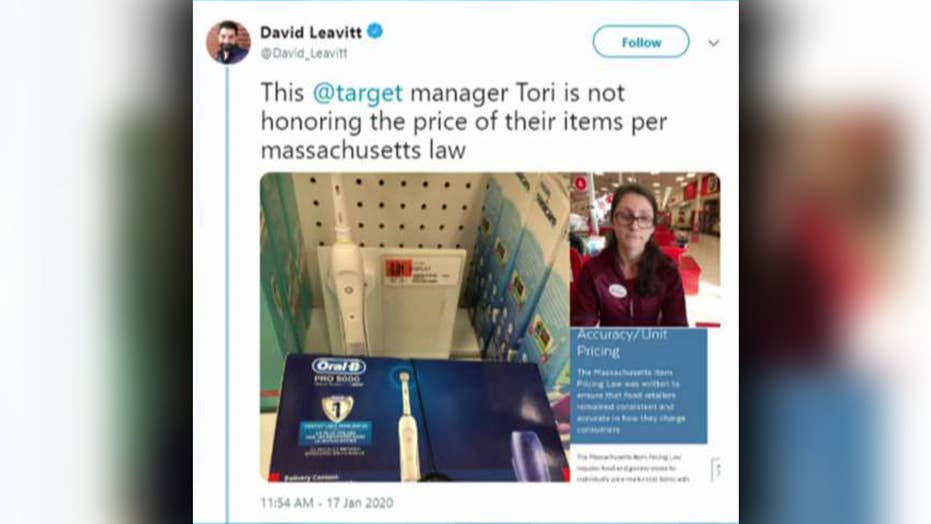 Twitter troll's shaming backfires; reaction and analysis on 'The Five.'

A Target customer's attempt to publicly shame a store manager over her refusal to sell him a mispriced electronic toothbrush has backfired after sympathizers raised over $30,000 for her.

The incident began Friday when David Leavitt, whose Twitter biography said he is an award-winning journalist with bylines for multiple media outlets, tried purchasing an Oral B Pro 5000 electric toothbrush that was marked for sale for $.01 at the Swansea, Mass., store, The Herald News reported.

Leavitt tweeted that a store manager named Tori refused to sell him the item for the displayed price, prompting him to call the police.

He then posted that the police said he would need to sue Target and that they would make him a report to take to court. Leavitt had 210,000 followers as of Monday.

In one tweet after the viral incident, Leavitt said he could not afford to go to the dentist in three years.

"So yes I wanted a good toothbrush and was thrilled to see such an amazing prize on an @OralB but @target refused to honor it and now I have to take them to court," he posted.

The tweetstorm led to the manager, identified by the newspaper as Tori Perrotti, being referred to on social media as #TargetTori. While several thousand Twitter users liked Leavitt's initial tweet, others sympathized with Perrotti.

A GoFundMe was created for her and has raised nearly $30,600 as of Monday night.

"Harassed this Target employee over an electric toothbrush, and then blasted her on Twitter to his 215k followers," the page read. "Lets send her on a vacation."

A GoFundMe set up for Tori Perrotti raised more than $30,000 after a Target customer tried to shame the store manager her over her refusal to sell him a mistakingly-priced toothbrush.  (GoFundMe)

In one photo, Perrotti is seen holding a paper that read: “Thank you for your kindness!"

In a statement to the paper, a Target spokesperson said the company is "grateful for the hard work our team members put in each day to serve our guests in our stores."

"We’re working closely with our store team on this and appreciate the messages of support the team has received from guests," the spokesperson added.