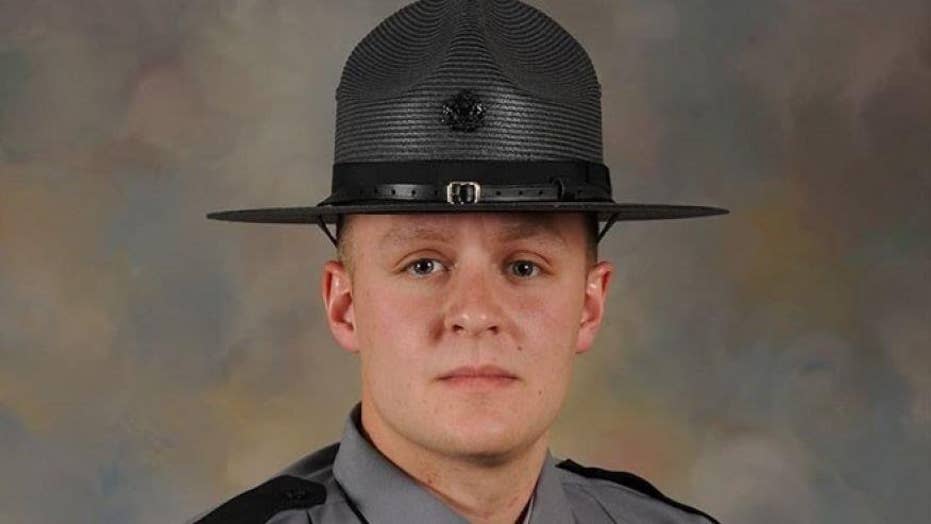 Trooper Landon Weaver was killed when responding to a domestic dispute

The suspect in the murder of a Pennsylvania state trooper was killed Saturday morning in a confrontation with police who had tracked him down to an unoccupied mobile home, authorities said.

Trooper Landon Weaver, 23, was killed responding to a domestic complaint Friday evening in a rural area in Huntingdon County, in central Pennsylvania. An overnight manhunt for the suspect ended not far away Saturday morning when police cornered 32-year-old Jason Robison in the mobile home, authorities said.

Cpl. Adam Reed, a state police spokesman, told the Associated Press that Robison refused orders to surrender and threatened officers on the scene, leading police to shoot him. His death was confirmed at about 10:30 a.m.

Weaver was shot while responding to a report of a protection-from-abuse violation at a home in Juniata Township that reportedly belonged to Robison’s mother.

Gov. Tom Wolf in a statement said Weaver will be remembered for "his bravery, his sacrifice, and his willingness to serve."

In the weeks before the shooting, Robison posted anti-police comments on his Facebook page, the Centre Daily Times reported.

“The only good cop is a dead cop,” he reportedly wrote in a Dec. 17 post that was deleted around 1 a.m. local time Saturday. The post included images of a police cruiser that had been involved in an accident and an injured officer, the newspaper added.

Robison was known to authorities, as he had been arrested around a dozen times with charges ranging from simple assault to arson, court documents revealed.

The remote area around where the shooting occurred has been closed off while police officers on foot, in cars and in a helicopter search for the trooper's killer.