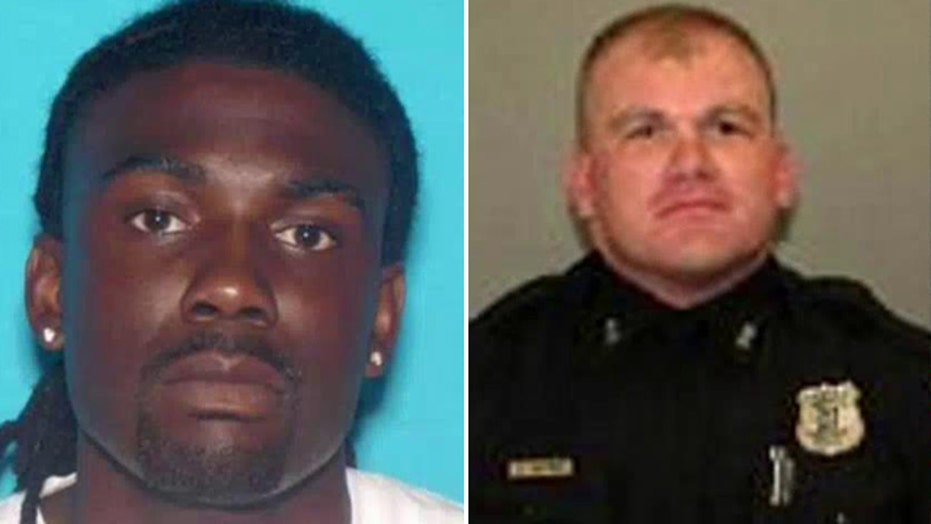 Reaction from the president of the Memphis Police Association

The man accused of murdering a Memphis police officer was being held on $9 million bail early Tuesday after turning himself in the day before.

Tremaine Wilbourn, 29, was charged with first-degree murder of officer Sean Bolton. Wilbourn is accused of killing Bolton after the officer interrupted a drug deal on Saturday night. Wilbourn managed to evade police for two days and had a few words for the Memphis department's director when he turned himself in.

Armstrong had used that word to describe Wilbourn during the manhunt following the shooting.

"I think he felt the walls closing in," Armstrong added, describing the search for the fugitive as "an exhaustive search both physically and mentally."

Wilbourn was a passenger in a 2002 Mercedes Benz that was parked illegally in a southeast Memphis neighborhood Saturday night, police said. Bolton approached the car and Wilbourn got out, confronted Bolton, and they got into a physical struggle, police said. Wilbourn took out a gun and fired, striking Bolton multiple times. The officer died at a hospital.

Wilbourn and the driver of the Mercedes ran away, and a neighbor used Bolton's radio to notify police about the shooting.

The driver later turned himself in to police, and was released without charges.

Armstrong said Bolton had interrupted a drug deal, and officers found about 1.7 grams of marijuana in the car.

Wilbourn was free on supervised release stemming from a bank robbery conviction, FOX13 reported. His lawyer argued during sentencing that Wilbourn was persuaded by his uncle to join the robbery to help him with his finances and "he was awaiting news regarding a possible college scholarship based on his athletic ability."

Wilbourn was sentenced to more than 10 years in federal prison and released on probation in July 2014. He used marijuana in December and was ordered to undergo mental health treatment July 7, according to federal court documents released Monday. It's not clear whether he was ever evaluated.

"All the signs were there, that clearly demonstrated he was a violent individual," Armstrong said at Monday's news conference.

Bolton, who was white, was a 33-year-old Marine who served in Iraq. He was the third Memphis officer to be fatally shot in slightly more than four years. Wilbourn, who goes by the names Tremaine Martin and "T-Streetz," is a black man who stands over 6-feet-2 and weighs 222 pounds.

Residents along the street where Bolton was gunned down said their block has been for years a quiet oasis amid the troubled neighborhood around them, where gunshots cut through the night and people are afraid to go outside after dark.

Melvin Norment, whose family has lived on the block for 25 years, said he saw the Mercedes on Saturday night and knew it didn't belong to his neighbors.

"It's not a car I've seen before," he said. "Because I sit outside all the time. I knew it wasn't anybody's car from around here."

Just a few blocks away -- at a busy intersection with fast-food restaurants, apartment complexes and an empty lot -- police have for years battled drugs and crime in this city long listed among America's most violent.

On Monday morning, yellow crime tape rested in a bundle along the curb on Summerlane Avenue. A vase with yellow, red and white flowers and a white stuffed unicorn had been placed at the scene as a make-shift memorial to the fallen officer.

The street is lined with small, mostly well-kept homes, and neighbors say it has been insulated from the crime erupting around them.

Phillip Price said he lives in Cottonwood Apartments, a complex located a few blocks from the shooting.

"We hear gunshots all the time," he said. "There's a lot of people here that carry weapons, that shouldn't be carrying weapons. Some of them are trigger happy. We have seven, eight different gangs in this area."

Michael Williams lives about three blocks from where Bolton was shot. Williams -- a police officer, candidate for mayor and president of the Memphis Police Association -- said he was in bed two weeks ago and heard 42 gunshots.

When they bought their house eight years ago, "you could be in your front yard and not be concerned, you didn't hear gunshots in the middle of the night, we weren't concerned about going to the gas station at night," he said.

But they've watched the neighborhood deteriorate, he said. Homeowners died off or moved to the suburbs, and the renters that replaced them didn't take the same sort of pride in keeping the streets safe and clean, he said.

Meanwhile, the number of police officers has dwindled from more than 2,500 in the city to around 2,000, Williams said. Budget cuts dug into officers' pensions and benefits, prompting experienced officers to flee to other departments, in cities with better pay and lower crime rates.

Rank and file officers, he said, are disgruntled and burned out.

Williams believes the most recent shooting can be traced, at least to some degree, to the fury over police treatment of African-Americans in incidents across the country. Williams estimates that the Memphis police force is around 60 percent African-American, roughly reflective of the city's overall population.

"I think officers are becoming hesitant to react," Williams said. "They don't want to end up in court, or plastered all over the national news."