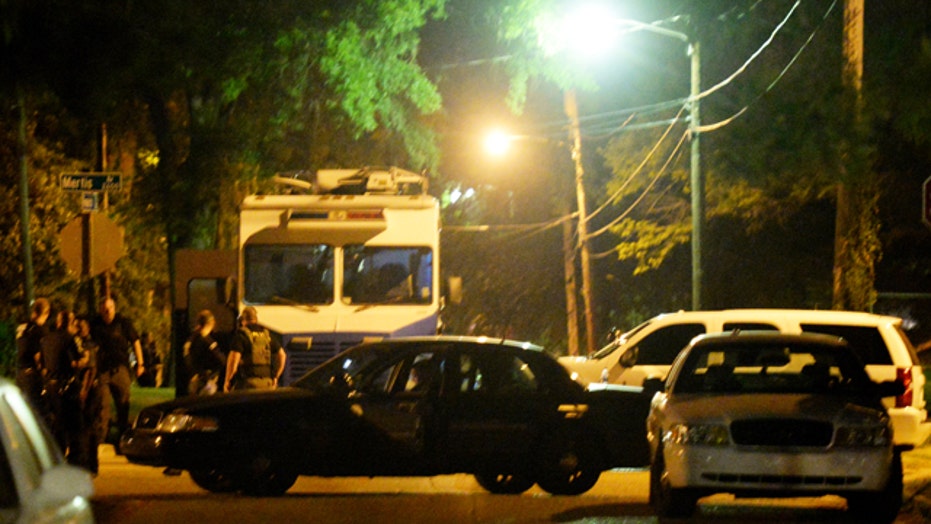 The gunman who has been on the run since killing a young Louisiana police officer who confronted him while on duty was arrested Thursday afternoon, according to Louisiana State Police.

Grover Deandre Cannon, 27, who was arrested after he allegedly shot four-year police veteran Thomas LaValley, was already wanted in connection with a July 15 shooting when LaValley confronted him while responding to a report of a suspicious person. LaValley, 24, was shot multiple times and died later at a local hospital.

Police said that Cannon was sitting in a detached garage, "just hanging out" when officers acting on a tip arrested him.

"He may have been consuming a hard beverage," said Cpl. Marcus Hines, spokesman for the Shreveport Police Department told the Associated Press.

Hines said Cannon was arrested without incident, adding that a tipster probably was acting both as a good citizen and for a $25,000 reward offered for information leading to Cannon's capture.

Shreveport Police Chief Willie Shaw said during a press conference Thursday that Cannon took one of his department's best.

"He did not hesitate to confront a bad person," Shaw said of LaValley. "In this day and time when it has become popular to denigrate law enforcement officers, here is a chance to say something good about a young officer who sacrificed his life to help others."

Shaw said he personally hired LaValley. LaValley previously worked as a camera man for a local news station, which is how Shaw met him, during an interview. After LaValley told Shaw that he applied to be a police officer and wasn't hired, Shaw told him to reapply and "if you qualify, I will hire you."

"He ended up being the honor graduate," Shaw said

The mayor of Shreveport issued a statement decrying the death.

"Last night, we lost one of our brave, uniformed officers in the line of duty. Our hearts are saddened," Mayor Ollie Tyler. "We ask for the community's prayers for this officer's family and SPD as we grieve the loss of one of our own who paid the ultimate sacrifice while serving and protecting the citizens of this city."

KTBS reported the last fatal shooting of a Shreveport police officer took place in October 2010. Shreveport is the third-largest city in Louisiana with a population of around 200,000 people. It is located in the so-called Ark-La-Tex region, where the borders of Arkansas, Louisiana, and Texas meet.