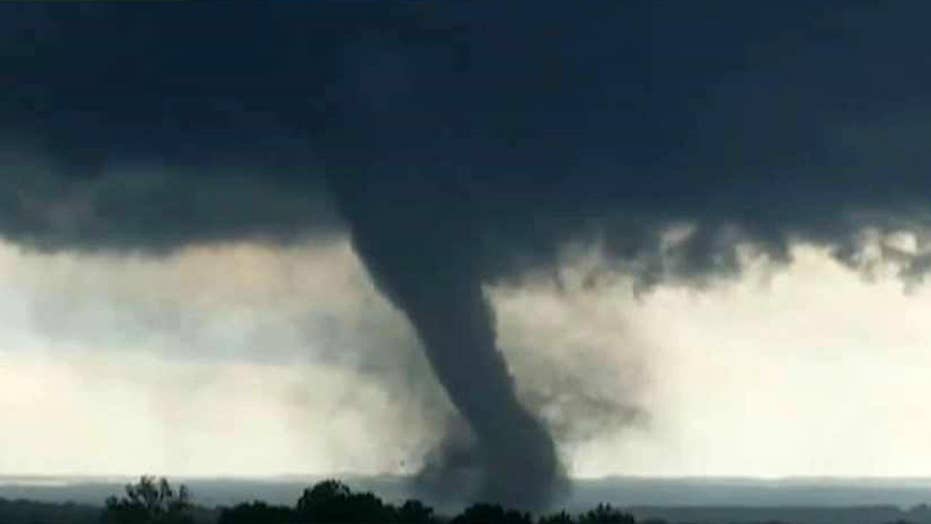 OKLAHOMA CITY – Forecasters turned their attention to the Ohio River Valley on Tuesday following a series of powerful storms that hit the Plains, including deadly tornadoes that destroyed homes and overturned vehicles in Oklahoma.

National Weather Service meteorologist Rick Smith said Tuesday's risk for bad weather was not as great as it was on Monday, when about two dozen tornadoes were reported across six states. In southern Oklahoma, crews were assessing damage from a tornado blamed for two deaths that sliced through two counties at speeds of between 135 mph and 165.

The National Weather Service's Storm Prediction Center warned Tuesday that communities along the Ohio River were at risk of seeing strong storms, perhaps including "a tornado or two." A separate system is poised to move through north Texas, including the Dallas-Fort Worth area, while another storm system should bring storms to the area from north Texas to near St. Louis on Wednesday.

Oklahoma emergency officials said two 76-year-old men were found dead after Monday's storms, one near Wynnewood and another about 35 miles away near Connerville. The medical examiner's office said it was conducting autopsies to determine how the men died.

Smith said the damage measured in Garvin and Murray counties was consistent with at least an EF3 tornado, a category of tornadoes that are capable of stripping the outer walls from even well-made homes. That storm, caught on video by several storm chasers, appeared white against the dark clouds of a supercell storm.

The Storm Prediction Center said it received about two dozen reports of tornadoes on Monday from parts of Oklahoma, Arkansas, Kansas, Nebraska, Iowa and Illinois.