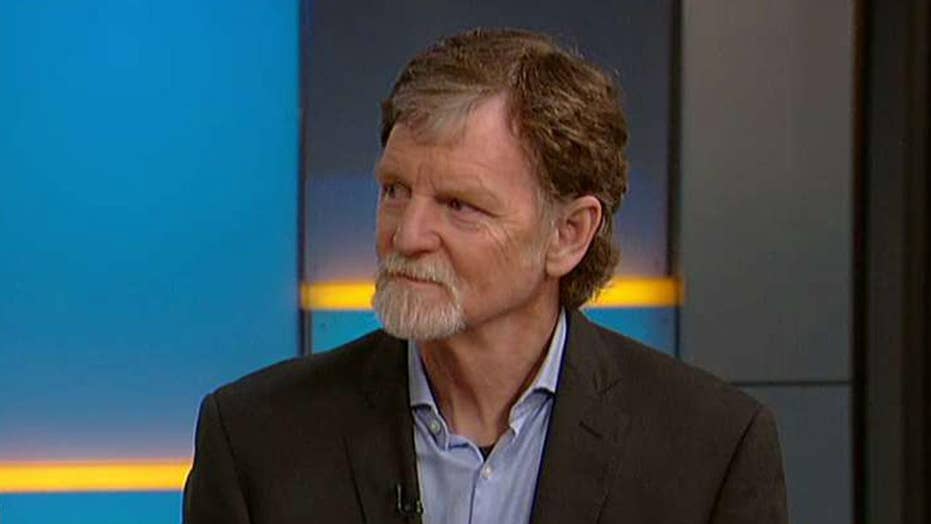 Supreme Court sides with Colorado baker who refused to bake a wedding cake for a same-sex couple. Jack Phillips speaks out on 'Fox & Friends.'

The Supreme Court ruled in favor of a Colorado baker who declined to make a wedding cake for a same-sex ceremony.

The case – Masterpiece Cakeshop, Ltd v. Colorado Civil Rights Commission – asked the high court to balance the religious rights of the baker against the couple’s right to equal treatment under the law. Similar disputes have popped up across the U.S.

The decision to take on the case reflected renewed energy among the court's conservative justices, whose ranks have recently been bolstered by the addition of Justice Neil Gorsuch to the high court.

Jack Phillips, the owner of Masterpiece Cakeshop in Lakewood, Colo., declined to make a cake for the wedding celebration of two gay men in 2012. Phillips told the couple that he would make a birthday cake but could not make a cake that would promote same-sex marriage due to his religious beliefs.

Shopping for a cake for their upcoming wedding and celebration, couple David Mullins and Charlie Craig stopped into Masterpiece Cakeshop.

Jack Phillips, the bakery’s owner, informed the couple that he did not provide cakes for same-sex weddings and celebrations due to his religious beliefs.

“What should have been a joyous occasion had turned into a humiliating occasion,” Deborah Munn, the mother of Craig, wrote in a blog post for the American Civil Liberties Union about the experience.

The ACLU of Colorado represented the same-sex couple in their complaint against Phillips.

Judge Robert Spencer of the Colorado Office of Administrative Courts decided — in line with the Colorado Civil Rights Division (CCRD) — that the bakeshop had violated a Colorado law which prohibits businesses from refusing service due to a person’s sexual orientation.

The Colorado Civil Rights Commission decided at a public hearing that Masterpiece had violated Colorado's Anti-Discrimination Act, or CADA.

Phillips was ordered to change its company policies as well as offer “comprehensive staff training” to employees. The cake shop was also required to provide quarterly reports about how it handled prospective customers.

The Colorado Court of Appeals ruled that Phillips cannot cite his religious beliefs in his refusal to provide a service to same-sex couples.

With the ruling, Phillips could face a penalty if he continues to deny wedding cakes to same-sex couples.

The Colorado Supreme Court declined to hear the appeal from Phillips.

On behalf of Phillips, the Alliance Defending Freedom, a conservative legal nonprofit, petitioned the Supreme Court to hear the case.

SUPREME COURT IS IN SESSION WITH GORSUCH ON BOARD, GAY WEDDING CAKE CASE ON DECK

“We are asking the U.S. Supreme Court to ensure that government understands that its duty is to protect the people’s freedom to follow their beliefs personally and professionally, not force them to violate those beliefs as the price of earning a living,” ADF senior counsel Jeremy Tedesco said in a statement at the time.

The Supreme Court agreed to consider the case during its next term, which began in the fall.

The Supreme Court ruled 7-2 in favor of Masterpiece Cakeshop.

"The laws and the Constitution can, and in some instances must, protect gay persons and gay couples in the exercise of their civil rights, but religious and philosophical objections to gay marriage are protected views and in some instances protected forms of expression," the Court said in its decision. "While it is unexceptional that Colorado law can protect gay persons in acquiring products and services on the same terms and conditions as are offered to other members of the public, the law must be applied in a manner that is neutral toward religion."

Justice Anthony Kennedy said when the Colorado Civil Rights Commission made its decision "it did not do so with the religious neutrality that the Constitution requires." The opinion says the Commission "violated the Free Exercise Clause, and its order must be set aside."

In its decision, the Supreme Court did not decide whether a business has the right to refuse to serve gay and lesbian people outright.