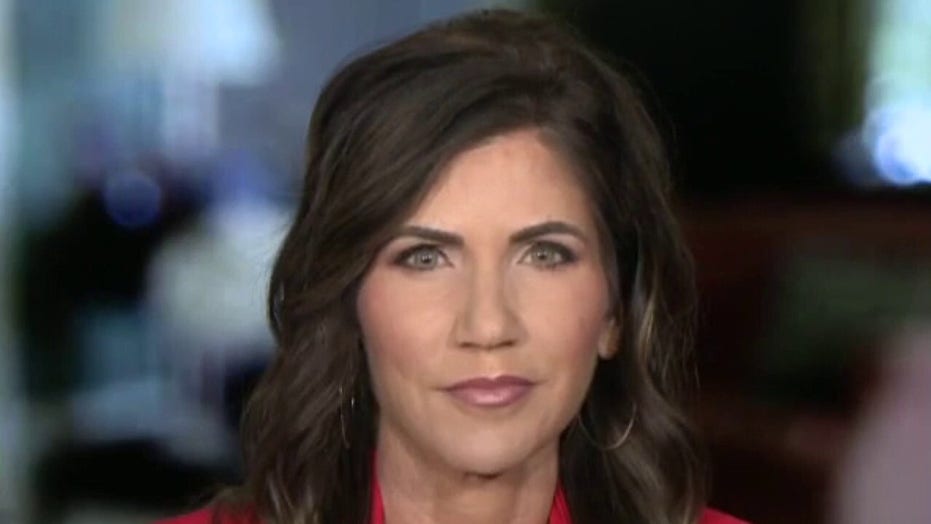 Gov. Noem on refusing to impose lockdown on South Dakota

Crowds of motorcycle enthusiasts gathered in Sturgis, S.D., Friday for the start of the 80th Sturgis Motorcycle Rally despite concerns over the coronavirus pandemic that has led to cancellations of other large-scale gatherings since the outbreak.

The rally could become the largest gathering since the pandemic began. Organizers were expecting 250,000 people from all over the country to make at the 10-day event. Many bikers were defiant over the restrictions that have altered daily life for most Americans.

“Screw COVID,” read the design on one T-shirt being sold. “I went to Sturgis.”

Thousands of bikers rode through the streets for the opening day of the 80th annual Sturgis Motorcycle rally Aug. 7 in Sturgis, S.D. (AP Photo/Stephen Groves)

For Arizona resident Stephen Sample, 66, who rode his bike to the event, the gathering is a break from the mostly homebound routine of the past several months.

Some of the crowd at Sturgis is composed of retirees and people in the age range deemed most at risk to suffer complications from the virus. South Dakota has had an upward trend in COVID-19 cases but the seven-day average was still only around84 per day.

Republican Gov. Kristi Noem has taken a largely hands-off approach to the pandemic, avoiding a mask mandate and preaching personal responsibility. She supported holding the Sturgis rally, pointing out that no virus outbreak was documented from the several thousand people who turned out to see President Donald Trump and fireworks at Mount Rushmore last month.

Bar owner Marsha Schmid said she was trying to prevent her establishment from becoming a virus hotspot. She spaced out tables, offered hand sanitizer and scaled back the number of employees at the rally.

Other residents wanted the rally to be postponed, but businesses insisted they need the event.

Among the crowds of people in downtown Sturgis, a handful wore face masks to prevent the spread of COVID-19. (AP Photo/Stephen Groves)

“This is a huge, foolish mistake to make to host the rally this year," Sturgis resident Lynelle Chapman told city counselors at a June meeting. “The government of Sturgis needs to care most for its citizens.”

Other locals planned to stay home. Carol Fellner said she bought groceries and planned to stay away from gatherings, saying the rally would be a "death sentence" for her husband, who suffers from kidney problems.

Fox News' David Aaro as well as The Associated Press contributed to this report.