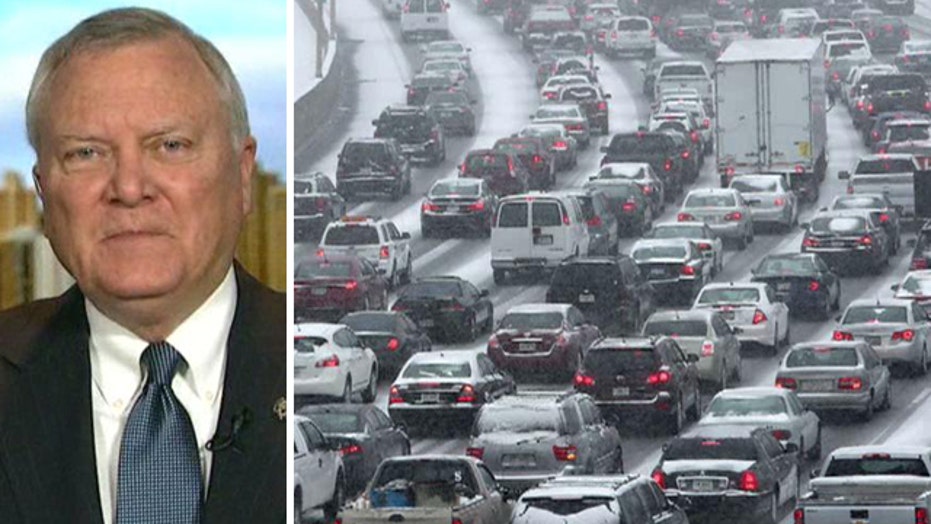 More than 200 students who were stranded at schools throughout Alabama because of a rare winter storm that pounded parts of the Deep South spent a second night camping out in their classrooms, as authorities are working to remove hundreds of abandoned vehicles from icy roads.

Alabama Gov. Robert Bentley told reporters late Wednesday he hopes that all students will be reunited with their parents by Thursday, WAFF.com reported.  He said more than 200 students who spent the night at schools Tuesday would do so again.

"We are making progress though," Bentley said. "One of the things I am proudest of [is] the way our school systems handled the situation, where our children have been stranded in schools. As I said yesterday, if you trust your teacher during the daytime, you ought to trust your teacher at night. That's exactly what they did."

Authorities in Alabama and Georgia said they hope to remove all abandoned vehicles from roads to get traffic fully moving again.

Deal said Thursday that the state did not make preparations early enough to avoid the problems that occurred. He says his agencies will undergo internal and external reviews and that the state will compile a new plan of action. Deal, who is up for re-election in November, earlier blamed federal forecasters, saying he was led to believe it wouldn't be so bad.

The National Weather Service explicitly cautioned on Monday that snow-covered roads "will make travel difficult or impossible." The agency issued a winter storm warning for metro Atlanta early Tuesday and cautioned against driving.

“[It’s] always a guessing game: Do you act on preliminary reports? The weather forecasts had bounced around for a number of days as to where the center of the storm was going to be. Initially it was projected to be south of Atlanta,” Deal told Fox News.

"Beginning Thursday morning, state agencies, to include Georgia State Patrol, National Guard and Georgia Department of Transportation HEROs will be available to transport motorists to vehicles abandoned on Atlanta interstates during the recent winter storm,” the Deal's office said in a statement late Wednesday, according to MyFoxAtlanta.com. Deal later told Fox News that "the interstates are relatively open and traffic is moving rather freely."

Georgia state officials also said they were creating a database to help motorists locate vehicles that were towed to impound lots.

In Alabama, the Department of Public Safety and Alabama National Guard patrolled all night to make sure nothing happened to abandoned vehicles, MyFoxAL.com reported.

The snow and sleet stopped falling and some traffic was moving again around Atlanta on Wednesday -- but transportation and rescue officials said that didn't mean it was safe yet to drive.

Officials from the Georgia Department of Transportation had said Wednesday night that they were concerned with sub-freezing overnight lows potentially leading to layers of black ice coating roads that might appear to be safe.

Although it was supposed to be in the high 30s Thursday, it is forecast to dip below freezing again before rising into the 50s on Friday.

"Whatever little leeway that we've gained with melting and slushiness is gonna refreeze," Georgia Department of Transportation spokeswoman Karlene Barron said of local road conditions. She added that the department was especially concerned with semi-trucks jackknifing and leading to additional traffic jams.

Heeding the warnings, school districts and state and local governments stretching from northwest to coastal Georgia announced that offices and classrooms would remain closed Thursday.

A storm that dropped just inches of snow Tuesday wreaked havoc across much of the South, closing highways, grounding flights and contributing to at least a dozen deaths from traffic accidents and a mobile home fire. Yet it was Atlanta, home to major corporations and the world's busiest airport, that was Exhibit A for how a Southern city could be sent reeling by winter weather that, in the North, might be no more than an inconvenience.

The Georgia State Patrol responded to more than 1,460 crashes between Tuesday morning and Wednesday evening, including two fatal crashes, and reported more than 175 injuries.

At Hartsfield-Jackson Atlanta International Airport, more than 400 flights in and out were canceled by 6 a.m. Thursday, according to data from the flight tracking service FlightAware. Many of those flights were canceled before the day began.

Gov. Deal and Atlanta Mayor Kasim Reed found themselves on the defensive, acknowledging that storm preparations could have been better.

The Atlanta area was crippled by an ice storm in 2011, and officials had vowed not to be caught unprepared again. But in this case, few closings or other measures were ordered ahead of time.

Among the commuters trapped in the gridlock was Jessica Troy, who described her drive home to the suburb of Smyrna as a slow-motion obstacle course on sheets of ice.

"We literally would go 5 feet and sit for two hours," Troy said after she and a co-worker spent more than 16 hours covering 12 miles.

"It looked like the zombie apocalypse," Republican state Rep. Mack Butler of Rainbow City said Wednesday. He was driving to a meeting of the Legislature on Tuesday when he had to stop at a gas station in Birmingham and spent the night in his pickup truck because highways were impassable.

A number of people who abandoned their vehicles in Birmingham, Ala., were still at the Boutwell Memorial Auditorium late Wednesday, waiting for bus service to resume, MyFoxAL.com reported.