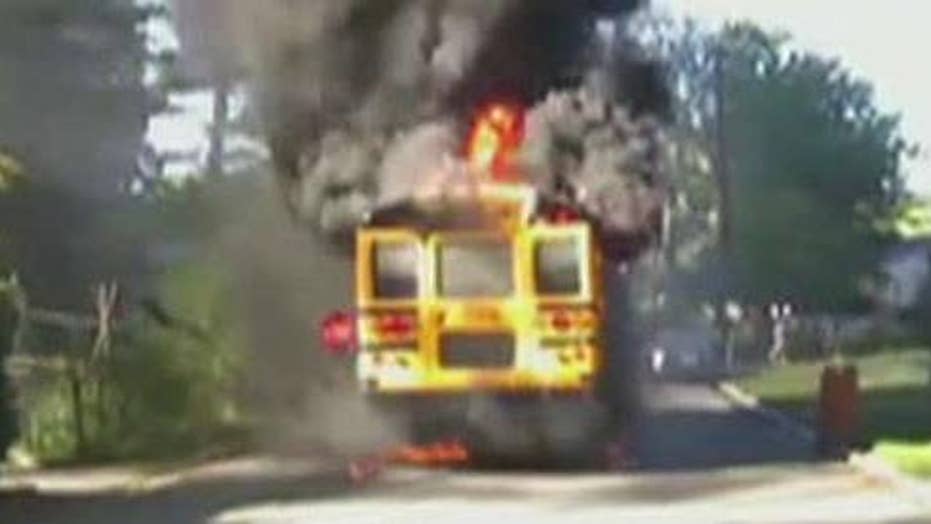 Bus driver hailed as a hero

Prince George's County Fire Department spokesman Mark Brady said in a statement that 20 students from Glen Arden Woods Elementary School were safely evacuated without any reports of injuries when the vehicle burst into flames in College Park, Md.

It's not clear what caused the fire, but investigators believe the fire started near one of the rear wheels and then spread, Fox 5 DC reported.

Dashcam video showed the bus engulfed in flames and heavy plumes of smoke.

The bus driver, identified by a parent on Facebook as Reneita Smith, was able to get all the students off with no injuries reported.

"A big THANK YOU to our school bus driver Reneita Smith who just saved 20 elementary school kids from a bus fire that completely destroyed the bus," parent Fazul Kabir wrote on Facebook. "Not only Reneita took each one of the 20 kids from the bus one by one, but also went into the empty bus again to check if everyone was out, while it was still burning. "I am a mom of two kids. it's my job to save them" she told me. The bus caught fire on 51st ave near Hollywood road about an hour ago. Thankfully, all the school kids went home safe."

Most parents were able to pick up their children from the scene, while the others were taken to safety by a second responding bus.