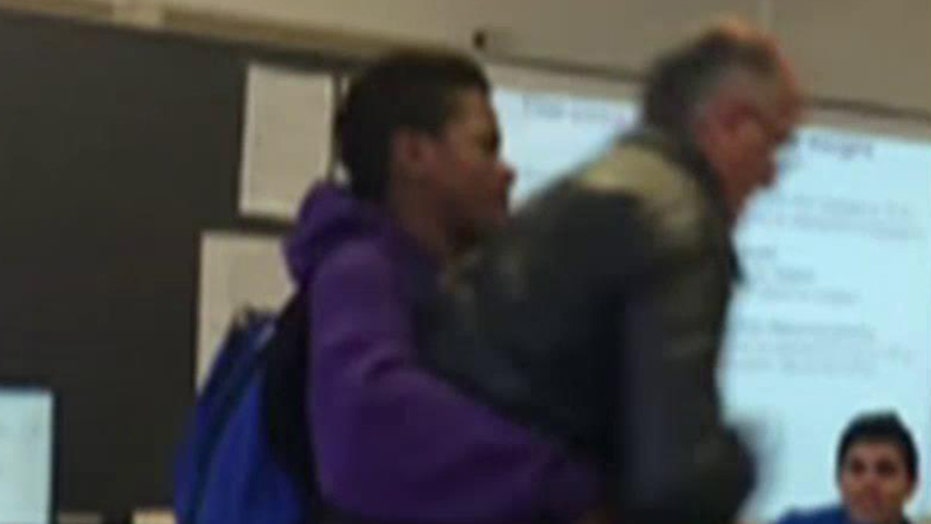 How do we better protect our educators?

A New Jersey high school student is facing assault charges after a shocking attack on a teacher that was captured on cellphone video.

According to the Paterson Press, the attack, allegedly by a ninth-grader at John F. Kennedy High School in Paterson, was captured on video and shows a teen slamming a teacher to the floor. The teen was reportedly angry because the educator had confiscated the student’s cellphone.

The 23-second video, which was posted on YouTube, shows the 16-year-old suspect with his arms around the 62-year-old teacher, knocking him into a desk. The student then pushes the teacher across the room before throwing him to the floor. The student is then seen wrestling something from the teacher’s hands as someone in the classroom yells for security.

"What strikes me is that the teacher never even defended himself."

The school’s principal of operations, David Cozart, told the paper that the incident happened during a physics class. He said the teacher apparently confiscated a phone – which belonged to the assailant – from another student. Staff members are allowed to take cellphones if students are using them for other than academic purposes.

The district filed a complaint against the student, who is suspended from school and who was picked up by Paterson police at his home last week.

“We took a statement from the teacher today,” Capt. Heriberto Rodriguez said Friday, according to the Paterson Press. “After that, we went out and found the juvenile and arrested him.” The teenager was charged with third-degree aggravated assault, the captain said.

The student will receive home schooling during his suspension, and a disciplinary hearing reportedly will determine his status for the remainder of the school year.

Officials have not released the names of the suspect or the teacher.

"What strikes me is that the teacher never even defended himself," retired JFK teacher Lee McNulty told the paper. "That just shows how much teachers are afraid of losing their job."

McNulty has characterized JFK as a place filled with chaos where fights are common.

“It’s troubling that in our society today students think that inside a school they can put their hands on each other and teachers as well,” said Jonathan Hodges, a veteran school board member. “I went online trying to find this video and I found numerous videos of teachers being attacked by their students.”