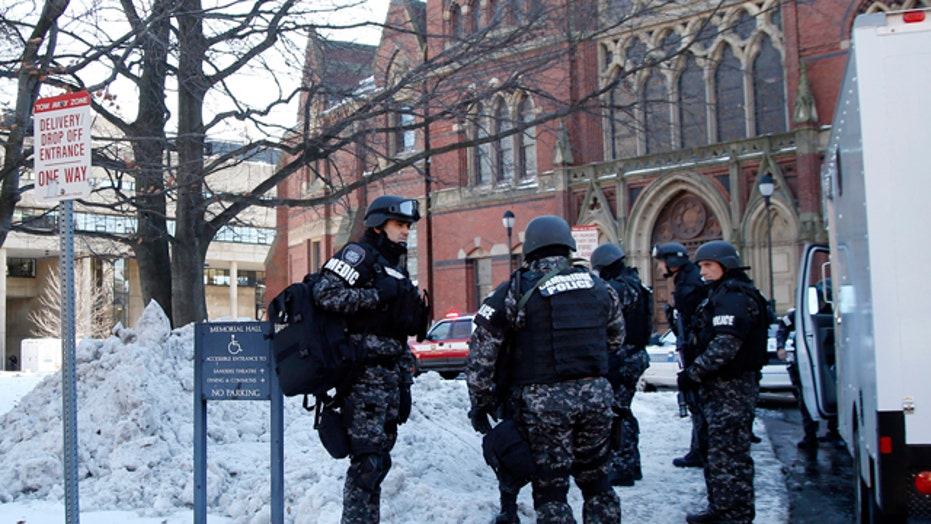 BOSTON – A Harvard student accused of making a bomb threat to get out of a final exam was under a great deal of pressure and seems remorseful, his lawyer said Wednesday after his client was freed on bail.

Eldo Kim, 20, was released on $100,000 bond into the custody of his sister, who lives in Massachusetts, and an uncle from North Carolina. Attorneys did not say where he will stay.

The U.S. attorney's office in Boston alleges Kim sent hoax emails Monday saying shrapnel bombs would go off soon in two of four buildings on Harvard's Cambridge, Mass., campus. The emails came minutes before he was to take a final exam in one of the buildings.

The buildings were shut down for hours before investigators determined there were no explosives.

Federal public defender Ian Gold says Kim was dealing with finals and the third anniversary of his father's death, which is this month.

"It's finals time at Harvard," Gold said. "In one way, we're looking at the post-9/11 equivalent of pulling a fire alarm. Certainly I'm not saying the government response was unjustified, but it's important to keep in mind we're dealing with a 20-year-old man who was under a great deal of pressure."

Kim, wearing a gray T-shirt and Harvard sweatpants, appeared somber as he stood before the judge.

Under the conditions of his release, he cannot enter Harvard's campus without prior approval of both the school and the federal court.

Harvard said it was saddened by the allegations but would have no further comment on the investigation.

Alexander Ryjik, a junior from Alexandria, Va., was about to take his Politics of American Education final in Emerson Hall when alarms went off and he had to leave. He recognized Kim from the class but did not know him personally. He said Wednesday he was not surprised to hear that authorities believe a student is responsible for the hoax.

"Harvard is just like every other school, where students are just as stressed and caught up with their work," he said. "At Harvard especially, people are scared to fail or do poorly, even a B. It just kind of reflects just how high-stress it is here. If it is true that a student sent a bomb threat to prevent himself from taking a final, I think it's sad that somebody would have to go to that length."

Authorities said Kim told them he emailed the bomb threats about a half-hour before he was scheduled to take a final in Emerson Hall. He said he was there at 9 a.m. when he heard the alarm sound and knew his plan had worked, according to an FBI affidavit.

On Saturday night, Kim sent an email over his dorm Listserv, The Harvard Crimson reported.

"I was wondering if anyone had taken GOV 1368: The Politics of American Education (Paul Peterson) in the past," Kim wrote in the email. "I have several quick questions about the course."

Kim became a naturalized U.S. citizen in fifth grade and renounced his South Korean citizenship, Gold said. Kim attended high school in Mukilteo, Wash. A cached version of his LinkedIn profile, which has been taken down, indicates that he did several internships in South Korea. When he was in high school he volunteered at a monastery in Nepal, according to a testimonial he wrote on the volunteer organization's website.

According to the complaint, Kim sent emails to Harvard police, two university officials and the president of the Harvard Crimson newspaper, saying bombs had been placed around campus.

The maximum penalties for a bomb hoax are five years in prison and a $250,000 fine, prosecutors said.