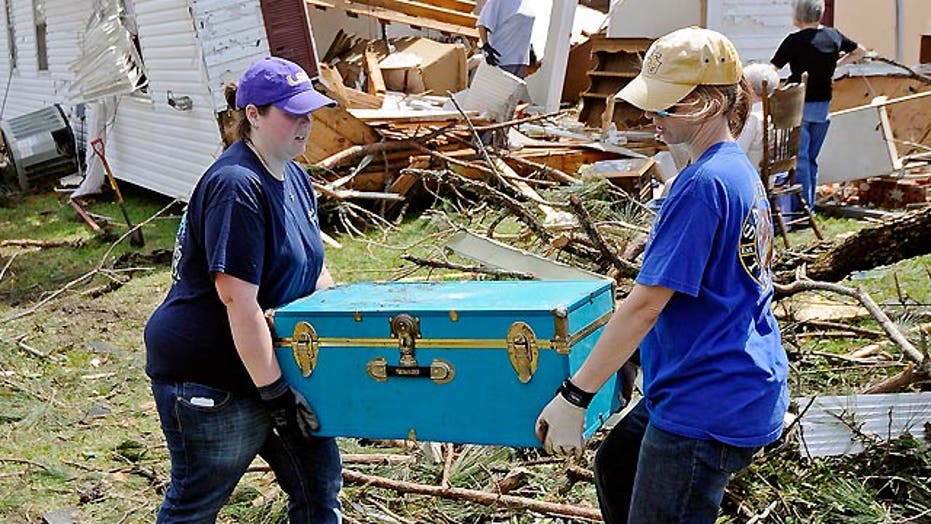 Survivors help each other clean up after devastating tornado

LOUISVILLE, Miss. – Florida Gov. Rick Scott declared a state of emergency Wednesday after his state was hit with more than 20 inches of rain in the past 24 hours, killing at least one and leaving others stranded in their houses and cars in the state's Panhandle.

Escambia County spokesman Bill Pearson told The Pensacola News Journal that at least one person died and several others were stranded by floodwaters in Escambia and Santa Rosa counties. The circumstances surrounding the death were not immediately known.

Pearson said fire rescue crews aren't able to respond to some calls early Wednesday because of road flooding around Pensacola. He said some people have climbed into their attics because of rising waters.

"We are asking people to stay off the roads," Pearson told the newspaper.

The county is moving boats and jet skis from beaches to streets for rescues. The Florida Fish and Wildlife Conservation Commission is lending boats and officers to help.

Schools and most government offices in the area are closed Wednesday.

Tamara Fountain, spokeswoman for the city of Pensacola, told The Pensacola News Journal that the city activated its Emergency Operations Center in response to the flooding.

"People are being rescued from their homes and cars," Fountain said. "People are still out driving. They need to stay in."

As much as 15 to 20 inches had fallen in Pensacola in a 24-hour period, National Weather Service meteorologist Phil Grigsby in New Orleans said Wednesday morning, with a few more inches expected. Grigsby said aerial rescues were planned, and the county moved boats and jet skis from the beaches to the streets to help. A portion of Interstate 10 was closed.

"We've seen pictures that people are posting with water halfway up their doors, front doors," Grigsby said. "It's going to be a big cleanup, looks like."

The rain and blooding was the latest wallop of a storm system that still packed considerable punch days after the violent outbreak began in Arkansas and Oklahoma. At least 35 people have been killed in that storms that started Sunday and spread from Oklahoma to North Carolina.

At least four possible tornadoes were reported late Tuesday in North Carolina, but there were no immediate reports of injuries. The storms hit especially hard in places such as Arkansas' northern Little Rock suburbs and the Mississippi cities of Louisville and Tupelo. Arkansas, with 15 deaths after a tornado blasted through Sunday, and Mississippi with 12 deaths from Monday's storms, accounted for the brunt of the death toll.

"We will overcome this," Louisville Mayor Will Hill said against a backdrop of hundreds of damaged buildings, including two hilltop churches pounded to rubble. "We're going to work together."

Authorities in Louisville searched until dark Tuesday for an 8-year-old boy missing since Monday's large tornado that killed his parents and destroyed the home where they lived. Though searchers didn't rule out finding the boy alive, officials were describing the process as one of "recovery."

Besides the dead in Mississippi and Arkansas, at least three died in Alabama, two in Iowa and one in Oklahoma.

After two days of destruction opened Sunday in the Midwest and continued Monday into the South, some didn't take any chances late Tuesday with yet more tornado watches.

Simon Turner and her 7-year-old son, Christopher, scrambled to a shelter in Tuscaloosa, Ala., on Tuesday afternoon after hearing a tornado watch had been issued around that city.

Frightened by memories of a killer tornado that partly demolished Tuscaloosa three years ago, the Turners had opted for refuge in a school with a reinforced hallway. "We'll be here till they say it's OK to leave," Turner said before the all-clear came.

Sunday was the anniversary of an outbreak of more than 60 tornadoes that killed more than 250 people across Alabama on April 27, 2011.

The dead Monday included University of Alabama swimmer John Servati, who authorities say took shelter in the basement of a home when a retaining wall collapsed. Servati was a business major on the dean's list.

Some survived or died amid split-second decisions.

William Quinn, 25, and others dove under the gap beneath a house in Mars Hill, Miss., seconds before a tornado blew heavily damaged the home and sheared off the roofs of nearby poultry houses. He called his decision "a spur of the moment thing."

But in the southern Tennessee community of Fayetteville, a married couple was killed Monday in a tornado after returning to their mobile home after mistakenly believing the danger had passed, a neighbor said. Authorities identified the victims as John Prince, 60, and his wife Karen, 44.

"We pulled up, and were in shocked seeing our own home. But then we saw Karen's father, and he said `John and Karen are gone -- They didn't make it,"' recalled neighbor Tiffani Danner. She had left and came back to find her own home destroyed as well.

Darrell Haney, in a home nearby, thought that community was out of the woods when TV switched from tornado warnings back to regular programming -- then suddenly cut back to a possible tornado.

Haney quickly plucked up two grandchildren and huddled in a bathroom with his wife, daughter and son-in-law. Almost immediately, he said, a tree crashed into a front room where one of the children had been sleeping. The roof was lifted off of the master bedroom.

"The house is being torn apart around you, and we're just crying out, `God protect us,"' Haney said. "Because at that point you're totally hopeless and helpless."

Elsewhere, Arkansas Gov. Mike Beebe visited several homes Tuesday that were damaged by a deadly twister, stopping at one location where three members of a family were killed. Three of Arkansas' 15 deaths were a father and two daughters and Beebe spoke to survivors, including two of the man's other daughters.

"It was kind of heartbreaking those two little girls that I talked to that lost two of their siblings and their dad," Beebe said afterward. "That's utter destruction up there ... and these people need to know that folks care about them."

Click here for more from The Pensacola News Journal.