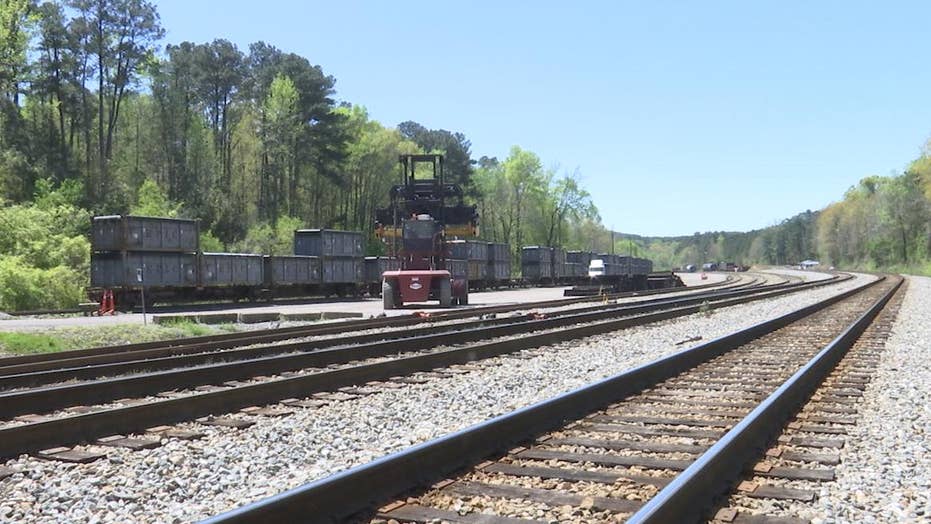 Flushed from out-of-state, the nicknamed

PARRISH, Ala. – This story smells - and not in a good way. For months, a "poop train" - full of, well, human poop - has been sitting in a rail yard in Parrish, Ala., stinking up the town and driving outraged residents to compare the pungent stench to rotting animal carcass.

Third grader Shelby Cain describes the smell, which has been around since January, as “stankiness.”

The town’s parks and recreation director, Nicholas Hammond, compared the smell to a rotting whale carcass - and then some. “This took [the whale carcass] to a whole different level,” Hammond said. “I thought I was hitting dead animals with the lawnmowers.”

At one point, Parrish's mayor counted 260 containers of biosolids in the town's rail yard. (Fox News)

Flushed from New York and New Jersey, millions of pounds of biosolids – the technical term for treated human waste – have come to a halt in rural Parrish. While Big Sky Environmental, which runs a nearby landfill, was transitioning part of its operations to Parrish, Mayor Heather Hall said the company never slowed down deliveries, resulting in a huge backlog in her town.

Parrish’s rail yard serves as a transitional point for the rank waste. A railroad does not directly touch Big Sky Environmental’s landfill, so the company has to transfer waste from the train to trucks in a nearby town, which is currently Parrish, about 20 miles away.

At the landfill, the biosolids act as a natural, fertilizer-rich land cover to keep other types of waste from flying out of the landfill, according to Dr. Julie Price, manager of sustainability at the University of Alabama Birmingham.

The Alabama Department of Environmental Management promised Hall that the biosolids do not cause any safety hazards, but Price said that promise depends on time.

“From a sustainability perspective, I love the idea of creative use of unavoidable waste like human waste,” Price told Fox News. “But it’s pretty easy to find out that in no way should they be stored for long periods of time because any trace of pathogens that are in there could grow into much scarier things.”

Price added that over the past decade, Alabama has become a target for landfill development because it offers some of the lowest gate fees, so sending waste thousands of miles away for some states is “still more economically viable than disposing of the trash in the home state.”

According to its website, Big Sky Environmental has an expected lifespan of 160+ years at 25,000 tons per day. (Fox News)

Big Sky Environmental has been accepting the feculent freight for about a year.

Before offloading to trucks in Parrish, the company transferred the waste in West Jefferson, Alabama, a city east of Parrish and only six miles from the Adamsville landfill.

Big Sky Environmental first used a rail spur in West Jefferson and then a rail yard in Parrish to transfer biosolids from the train to trucks, which carry the waste to a landfill. (Fox News)

In the summer of 2017, the smell set in, and the city started seeing hoards of flies, according to attorney Mark Parnell, who represents West Jefferson.

Jefferson County officials filed an injunction based on zoning laws to prevent the transfer of tepid waste in their area. This shifted Big Sky Environmental’s work to Walker County.

During the transition between counties, the deliveries of waste continued at their regular pace, producing a build-up in Parrish.

At one point, there were 260 containers of waste sitting in the rail yard, wreaking havoc on the town.

“It was terrible,” Hall said. “You couldn’t sit outside. The kids couldn’t play baseball. They couldn’t practice.”

Hall pointed to holes in regulating this part of the waste’s journey – from train to truck. “ADEM has no control of this material until it hits a landfill,” Hall told Fox News.

Price agreed, saying, “From what I understand, the transport of these things is outside of [ADEM’s] scope.”

Fortunately for the 982 Parrish residents, the two-square mile town is getting some help from state lawmakers, who have promised the mayor that relief is imminent.

“I can’t quite get into details of the arrangements that have been made, but my understanding is that this is a nightmare and it’s about to be over,” Hall told Fox News.

Now, only a third of the containers are parked in Parrish, diluting the stench significantly.

Hall said lawmakers are working “behind the scenes” to solve the issue, but could not give any indication what that solution could be. Alabama State Sen. Greg Reed, Governor Kay Ivey and Big Sky Environmental did not respond to Fox News’ inquiries.

Alabama residents are closely watching Big Sky Environmental’s request to renew its permit, which currently sits before ADEM. In the meantime, the company still has to transfer the waste from the poop train to trucks for the final leg of the journey. And if not in Parrish, where?

“It’s likely that the lawmakers are going to find a place to store and do the transaction in an area of the state that doesn’t make as much noise, where land values are low,” Price said. “This would never happen in a very affluent neighborhood.”

Alabama lawmakers told Parrish's mayor that all of the containers would be removed over the next week and a half. (Fox News)