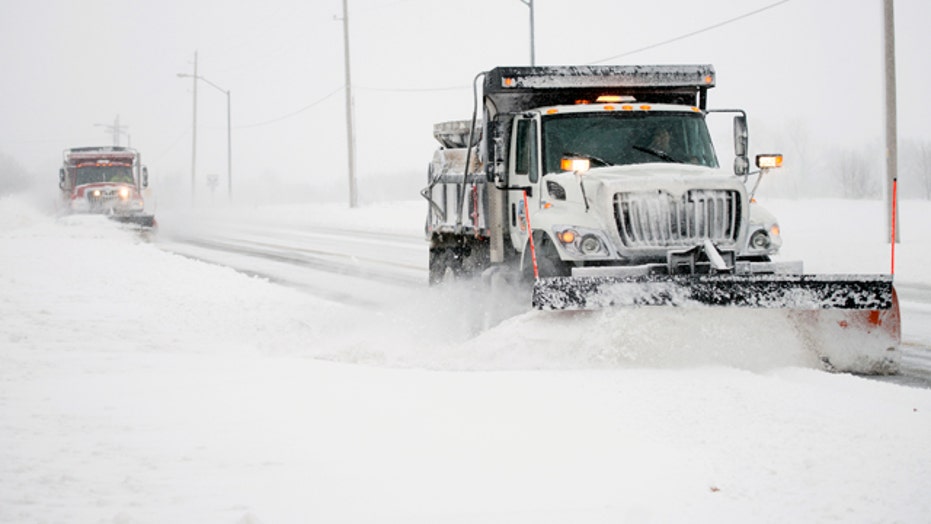 A wide-ranging storm stretching from the Midwest to the East Coast is burying thoughts of springtime weather under a blanket of heavy wet snow and slush, though less snow is predicted to fall as the storm moves eastward.

Light rain and snow were falling in New Jersey on Monday morning as the storm moved in after dropping 2 to 6 inches in Ohio.

The storm was expected to drop a similar amount as it moved across Pennsylvania, except for higher elevations like the Laurel Mountains southeast of Pittsburgh, where 6 to 10 inches were forecast -- though there were no major problems reported.

A winter storm warning is in effect for parts of New Jersey where the National Weather Service says 3 to 5 inches of snow are expected to fall.

Advisories are also up for Philadelphia and other counties, where snowfall totals should be 2 to 4 inches.

Visibility is likely to be the tricky issue as drivers around the Philadelphia area head to work.

Snow has started to accumulate around the area and crews are now out on the roads treating the streets, MyFoxPhilly.com reported.

Around Washington, wet heavy snow shut down schools or delayed openings throughout the area, and local governments also moved back their opening times, Reuters reported.

The winter-like early spring weather forced the cancellation of more than 500 flights.

In the mid-Atlantic, Heather Sheffield, a meteorologist with the National Weather Service in Sterling, Va., said more than three inches of snow had been reported by 8 a.m. Monday at Washington Dulles International Airport, and more than an inch at Reagan National Airport.

Sheffield said most of that region's expected snowfall had already occurred but "it happened at the worst time for the morning commute. I know I had a tough time."

The slushy morning commute and widespread school delays as the storm moved eastward were minor compared to the storm's impact on the Midwest, where it was blamed for separate crashes in Illinois, Kansas and Missouri on snow-slicked roads.

Springfield, in central Illinois, got slammed with a record 17 inches of snow, and several central Indiana counties declared snow emergencies after getting hit with up to 8 inches of snow.

Slick roads were also being blamed for a series of crashes on Interstate 60 north of Indianapolis that sent two people to area hospitals with life-threatening injuries. The Indiana State Police reported late Sunday that two people in a 2012 Subaru were hurt when the driver lost control while coming upon the scene of a previous crash involving a semitrailer.

The Subaru hit the tractor-trailer and ended up in a ditch, police said. Authorities said both driver and passenger had life-threatening injuries and were taken to area hospitals. An update on their conditions was not immediately available.

Earlier Sunday night, a jack-knifed semi and subsequent fuel leak required a hazardous materials response outside Indianapolis, officials said. The Fishers Department of Fire and Emergency Services said a tractor-trailer was southbound on Interstate 69 when its driver lost control. No one was injured.

The storm was expected to weaken as it moved into Pennsylvania late Sunday and into Monday. Before it exits off the coast of New Jersey on Monday night, the storm could leave 2 to 4 inches in that state as well as Delaware, northern Maryland and southern New York.

To the west, parts of Colorado, where temperatures remained in the single digits Monday, and northwest Kansas spent Sunday digging out from 10 to 15 inches of snow that were dumped there Saturday. Southwestern Nebraska got up to 7 inches. Winds gusting at speeds of up to 45 mph created snow drifts of 2 to 3 feet in the three states, said Ryan Husted, a meteorologist with the National Weather Service in Goodland, Kan.

"We have pretty much cleared out. Sunny skies. It's starting to melt a little bit," Husted said Sunday. Transportation officials reopened several closed highways, including a stretch of Interstate 70 spanning from Denver to Colby, Kan.

The storm dumped 7 to 9 inches of snow from eastern Kansas into central Missouri before tapering off Sunday morning, said Hawblitzel.

Authorities on Sunday also released the names of two people killed in separate crashes. In northeast Kansas, Anthony J. Hinthorne, 40, of Topeka, was killed Saturday afternoon in a single-vehicle crash and rollover on the Kansas Turnpike as snow was falling in Shawnee County, the Kansas Highway Patrol said. Later that night, Joshua J. French, 24, of Naperville, Ill., was killed when he lost control of his vehicle on a wet stretch of Interstate 35 in eastern Missouri's Clay County.

In the central Missouri town of Columbia, TV station KOMU was briefly evacuated Sunday morning because of high winds and a heavy buildup of snow on the broadcast tower next to the building. And Missouri Gov. Jay Nixon announced he was cancelling a couple events planned for Monday because of the weather.