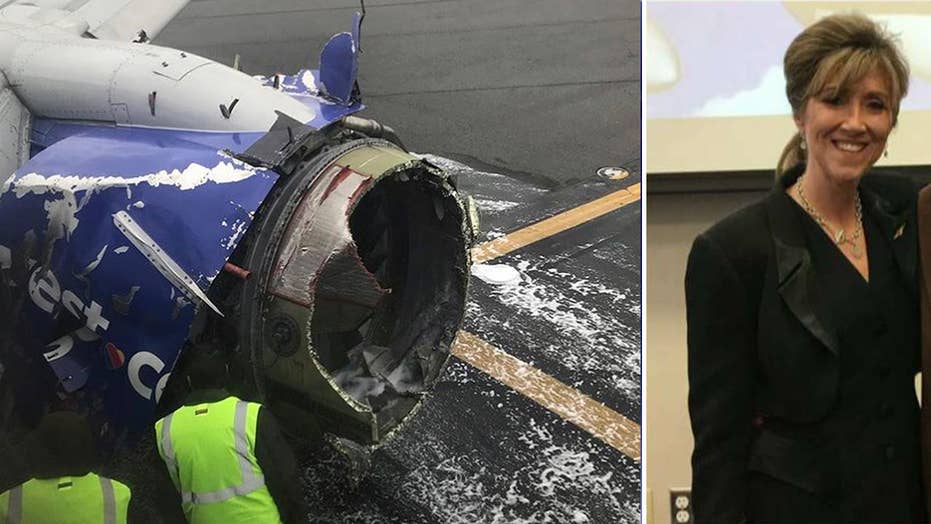 Investigators probing the death of the "remarkable" mother of two who was "partially sucked out" the window of a Southwest Airlines flight Tuesday said metal fatigue may be responsible for the engine explosion that burst the window next to Jennifer Riordan's seat.

Fellow passengers tried in vain to save Riordan, a New Mexico businesswoman, and were able to pull her back into the jet. But she was pronounced dead at a Pennsylvania hospital after Flight 1380 made an emergency landing at Philadelphia International Airport around 11:20 a.m.

Jennifer Riordan was identified as the person who died on the Southwest Airlines flight on Tuesday. (The Albuquerque Journal via AP)

Former ace Navy pilot Tammie Jo Shults was identified as being the "American hero" who guided the damaged plane safely to the ground.

Shults calmly radioed news of the mangled engine to air traffic controllers from the cockpit.

Southwest pilot Tammie Jo Shults, left, pictured at her alma mater MidAmerica Nazarene where she graduated in 1983. Shults was praised for landing the Dallas-bound Flight 1380 Tuesday after one of its engines blew mid-air at 32,000 feet. (MidAmerica Nazarene)

“We have a part of the aircraft missing, so we’re going to need to slow down a bit," Schults said, according to Reuters.

But the pilot's steady tone and skilled maneuvering was in direct contrast to the chaos enveloping the passenger cabin behind her.

One person reported there was "blood everywhere," while passenger Joe Marcus said it "felt like we were just falling from the sky."

Images soon emerged of the smashed out window next to which Riordan was apparently seated.

Riordan worked as a vice president of community relations for Wells Fargo, and was a graduate of the University of New Mexico. A close friend of Riordan told KOB that the mother of two, who was married to Michael Riordan, who served until recently as the chief operating officer for the city of Albuquerque, "never forgot the [New Mexico Broadcasters Association] and supported the foundation however she could." The friend added that "Jennifer was a remarkable mother and part of the NMBA family."

Shrapnel from the exploded engine shattered a window on the plane and partially sucked out a passenger. (Marty Martinez)

"Jennifer's vibrancy, passion and love infused our community and reached across our country. Her impact on everything and everyone she touched can never be fully measured," a family statement, published by WFAA-TV, read. She was further described as "the bedrock of our family."

As the search for the cause of the calamity continued, National Transportation Safety Board chairman Robert Sumwalt said one of the engine’s fan blades was separated and missing. The blade was separated at the point where it would come into the hub and there was evidence of "metal fatigue," Sumwalt said.

Sumwalt said part of the engine was found in Bernville, Pa., about 70 miles from Philadelphia’s airport.

The engine will need to be further examined to understand what caused the failure, the NTSB said. The examination was expected to take 12 to 15 months.

Picture of the exploded engine after the plane landed safely. (AP)

Meanwhile, Bill English, the NTSB’s lead investigator, said he has obtained the flight data recorder and cockpit voice recorder from the flight that are being sent to the agency’s headquarters in Washington, D.C. for download. It was not immediately clear when the transcripts would be made available.

Southwest CEO Gary Kelly said there were no problems with the plane or its engine when it was inspected on Sunday.

The jet's CFM56-7B engines were made by CFM International, jointly owned by General Electric and Safran Aircraft Engines of France. CFM said in a statement that the CFM56-7B has had "an outstanding safety and reliability record" since its debut in 1997.

Fox News' Nicole Darrah and Bradford Betz and The Associated Press contributed to this report.