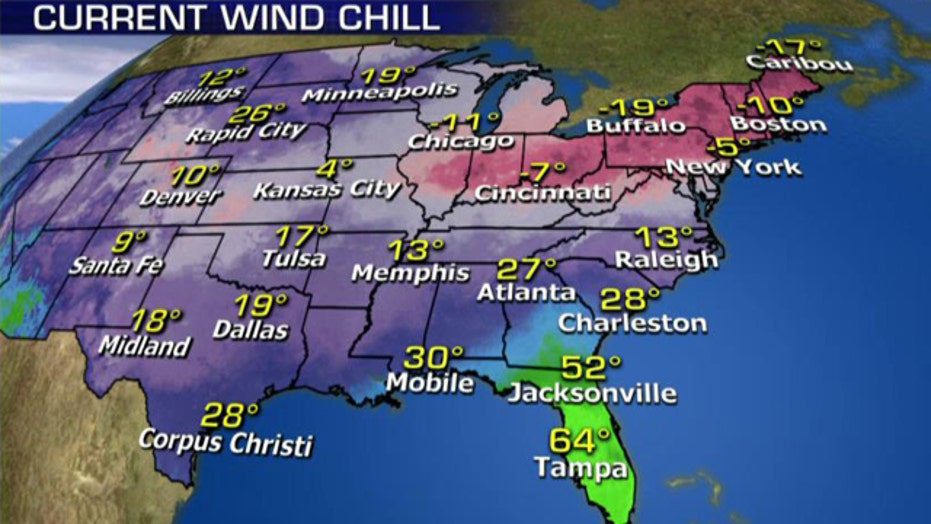 On the bright side, February will be over in just four days.

In the meantime, an arctic air mass passed down from Canada continues to plunge much of the U.S. into record-setting lows, continuing a punishing stretch that could result in temperatures settling 10 degrees below average for the month, forecasters say.

Meanwhile, a sloppy salvo of snow, sleet and freezing rain continues to slash through the southeastern U.S., bringing travel to a halt and promising more winter weather this week. School districts in more than a half-dozen states from Texas eastward either canceled or delayed classes, and The Weather Channel said parts of eastern Tennessee and western North Carolina had already seen up to three inches of snow early Tuesday evening.

A winter storm warning remained in effect for northeastern Texas and parts of Louisiana, Arkansas, Alabama, Mississippi, Arkansas and the Carolinas through Wednesday, and four to six inches could blanket the area by Thursday, Bruce Terry, a National Weather Service meteorologist, told FoxNews.com.

But while the south slogs through a series of winter storms, millions in the northern part of the country shivered amid record lows.

Already, the 1,000-mile-wide swath of frigid air that settled Monday over southern Canada, as well as the Ohio River Valley, the mid-Atlantic states and New England has broken records. In Montreal, Tuesday's low of -12 degrees easily beat the existing -7 mark set in 1992, while in Toronto, a low of -4 bested the previous mark of -3 degrees set in 1993. At Dulles Airport in Washington, D.C. Tuesday morning, a -4 reading shattered a 1967 record by 28 degrees. Columbus, Ohio (-11 degrees), Pittsburgh (-9) and Newark (4) also set record lows as well.

The coldest place in the continental U.S. Tuesday morning? Whitefield, N.H., which woke up to -33 degrees.

In total, about 30 record lows were set in the region, Terry said.

"Ever since that first blizzard in Boston at the end of January, it's been one artic air mass after another," he said.

But the below-normal temperatures weren't limited to the northern slice of the country.

The storm system that's producing snow over the Carolinas has taken a swipe at the southeastern U.S. as well. Jackson, Miss. recorded a high of 33 degrees Tuesday -- about 30 degrees below its typical average. Jacksonville, Fla. saw a high of 51 degrees, while it was 53 in Tallahassee.

And across the country, Tuesday's high of 35 degrees in Flagstaff, Ariz. was about 15 degrees colder than average, the result of a low-pressure area bringing rain and snow to some parts of the state.

Terry said the unseasonably cold weather in the north was set for a one-day reprieve on Wednesday, with some areas climbing into the mid-20s before a new wave of cold weather rolls in. But he said temperatures would be closer to average early next week.