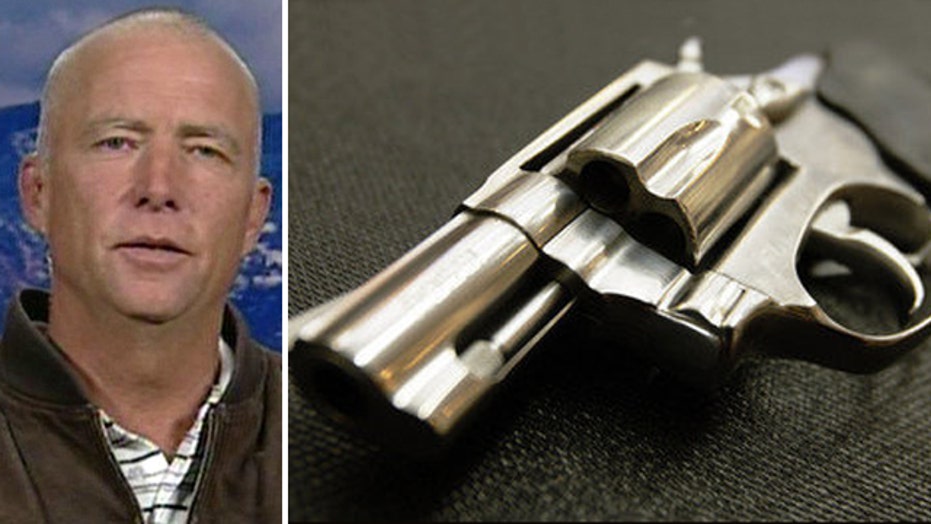 Small Utah town encourages a gun in every home

Officials in a small Utah town want to make sure every head of household has a firearm and knows how to use it, and they want to give school teachers training with guns too.

Spring City Councilman Neil Sorensen first proposed an ordinance requiring a gun in every household in the town of 1,000. The rest of the council scoffed at making it a requirement, but they unanimously agreed to move forward with an ordinance "recommending" the idea.

The council also approved funding to offer concealed firearms training Friday to the 20 teachers and administrators at the local elementary school.

"It sends a statement that criminals better think twice," Sorensen told The Associated Press on Tuesday. "If a teacher would have had a concealed weapon in Sandy Hook, I think the death loss would have been fewer. If sane, trained people had guns, they could have shot back."

The measure, which will go before the full council in February for further review, seems to have the support of the council's five members and many residents in the farming community about 90 miles south of Salt Lake City.

But school administrators don't think arming teachers is wise, and they are not encouraging teachers to participate in Friday's training.

"The more guns you have in the school, the more dangerous it is," said Leslie Keisel, superintendent of the North Sanpete School District.

Councilman Noel Bertelson said making guns in every house mandatory was too much, but he agrees the town would be safer if everyone was armed. With only a part-time police force, he said, response time is not like it is in a big city.

"If a person is able to take care of themselves for a while, it would probably be a good thing," Bertelson said.

The community is still reeling from the double-murder on New Year's Eve 2011 of an elderly couple in nearby Mount Pleasant. Sorensen said what used to be a peaceful, quiet town has been sullied by increasing criminal activity.

Thefts of metal for scrap and other property also have become a problem, Councilman Boyd Mickel said.

"We are kind of tired of people breaking in and taking stuff," said Mickel, explaining why he voted to urge every house to have a gun.

Timm Thompson, a coal miner and father of four girls who lives in Spring City, backs the council's measure.

"People think small towns are a good place to live," Thompson said. "But there is more crime and drugs than you can imagine."

Thompson, who owns 78 guns he keeps locked in a safe, doesn't want teachers to act as police officers. He said some kids are "hooligans" and could overpower teachers for the guns.

Sisters Katy Harmer and Caroline Lott, however, say arming teachers would make them feel better about sending their children to the Spring City Elementary School. The co-owners of the town's coffee shop, Das Coffee, said most Spring City residents keep guns for hunting, leaving only a handful without weapons.

Angela Johnson, owner of the Sinclair gas station, said she doesn't like guns but backs the council's proposal.

"If criminals knew they would be fired against, I think it would cause pause," Johnson said.

Shurtleff said that when the Washington County town of Virgin enacted a local law in 2000 requiring households to keep guns, he warned them against trying to enforce the measure.

Spring City leaders say they got the idea from a city in Georgia that passed a similar law. In 1982, Kennesaw, Ga., made headlines by requiring heads of households to own a gun and ammunition. On its website, Kennesaw boasts that its burglary rate declined after the law took effect.

"I don't think there is anything wrong about being educated how to use a gun," Thomas said.

But Thomas doesn't believe having more armed teachers would necessarily prevent or mitigate the damage in mass shootings. Utah law allows teachers to have concealed weapon in classrooms, but the district doesn't advocate for that, Thomas said.

"By bringing weapons into school, are we creating more problems than we are solving?" he asked. "It could create a new problem. We don't want to deal with that problem."

The proposed ordinance will be discussed at the Feb. 7 City Council meeting. A public hearing will be held three weeks later.