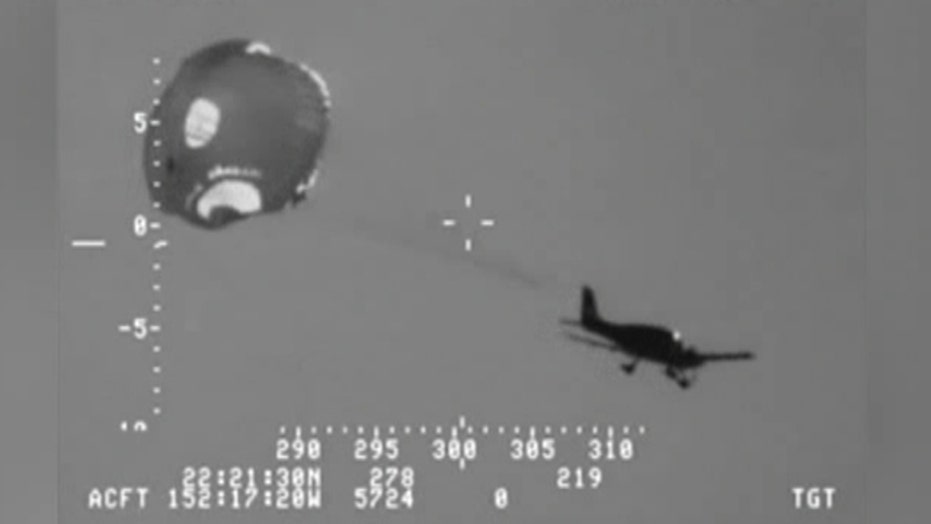 Two small planes ran out of fuel and crash-landed into the Pacific Ocean off Hawaii on the same day, with one briefly nose-diving before leveling out and drifting down to the water beneath a massive parachute.

The five people aboard the planes survived after dramatic rescues, authorities said.

In one of the crashes, the pilot put down the aircraft near a cruise ship and was pulled aboard it in a life raft amid giant waves.

The National Transportation Safety Board said Monday it is investigating the separate incidents, which occurred Sunday.

One of the planes, a single-engine aircraft carrying only a pilot, crash-landed about 250 miles off Maui. The other plane was carrying four people and went down several miles off Oahu.

NTSB investigator Josh Cawthra said both planes sank, and he didn't know if they would be recovered. He said he had not yet spoken with either pilot and had few other details.

Dramatic Coast Guard video shows the plane carrying just the pilot — a Cirrus SR22 traveling from California to Maui — as it releases its parachute. The plane drops nose-first and then levels out and plops into the sea.

The pilot escapes out the top of the aircraft and drifts away in a small raft.

The SR22 pilot traveling from Tracy, California, radioed authorities at 12:30 p.m. about plans to ditch the aircraft because of dwindling fuel. The plane has a range of about 1,200 miles — only half the distance to Maui — but it was equipped with an auxiliary fuel system, according to Cawthra.

The Coast Guard directed the plane to go down near a cruise ship, and the pilot deployed the parachute system around 4:45 p.m. and safely got into a life raft. Amid 9- to 12-foot seas and winds of 25 to 28 mph, the cruise-ship crew rescued the pilot, who was in good condition, authorities said.

Parachutes are standard equipment on the SR22, and all other aircraft manufactured by Duluth, Minnesota-based Cirrus Aircraft, according to company spokesman Ben Kowalski.

He said parachutes have been deployed on Cirrus aircrafts in 51 incidents, and are responsible for saving a total of 104 lives, including the pilot in Sunday's crash.

Kowalski said he was not at liberty to identify the pilot, an agent who was en route to Australia to deliver the aircraft to an owner. The SR22's starting price is listed at $499,900.

In a second crash Sunday, a single-engine Cessna flying from Kauai to Oahu with four people aboard declared an emergency at 6:18 p.m., saying fuel was running low and the plane might need to ditch, the Coast Guard said.

It crash-landed about 11 miles west of Oahu, and a Coast Guard helicopter rescued three adults and one child.

All four received emergency treatment, but their conditions were not immediately available.