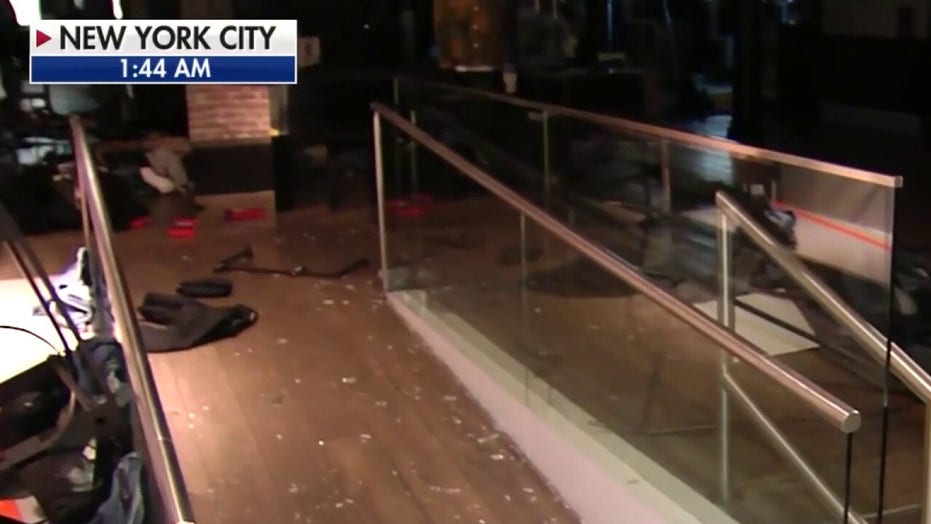 Small business owners in several metropolitan cities are wondering whether they’ll be able to economically recover after protests in reaction to George Floyd’s death turned violent, and rioters destroyed storefronts and looted goods as the streets devolved into chaos.

The owner of Levels clothing store in Minneapolis, Brandy Moore, 41, has been left with just rubble after rioters broke into one of her locations last week to loot the store before setting a fire that spread to several adjacent buildings, USA Today reported.

Karen Williams sweeps broken glass from a window at the Louisville Visitors Center, Saturday, May 30, 2020, in Louisville, Ky. The window was broken Friday evening during a protest over the deaths of George Floyd and Breonna Taylor. (AP Photo/Darron Cummings)

Moore, who is black, looked onto the rubble while wearing a hoodie with the message “Please, I can’t breathe. My stomach hurts. My neck hurts. Everything hurts. They’re going to kill me." These were the words Floyd is heard saying in the now-viral video, as a white Minneapolis police officer held his knee to his neck.

"I'm hurt that I lost this. But ... I can't cry right now," she said. "I can't go home and cry and be hurt because I lost businesses. George Floyd lost his life. He'll never be here again."

That store had been in business for five years before it was destroyed last week. Her second location across town was spared by armed men who stood on its porch to ward off rioters. Moore said she left a job with the Minneapolis public schools in 2011 to build her fashion business.

Though she said she’s hopeful to raise enough money through GoFundMe to recover her losses, Moore said she’ll be disappointed if she can’t rebuild in the heart of the diverse southside neighborhood.

The owner of Ax-Man Surplus in St. Paul, located just blocks away from where Moore’s second store was protected by armed men, said he barricaded himself inside his business’ bathroom while rioters pillaged his store last week.

A worker sweeps broken glass from a window at the Louisville Visitors Center, early Saturday, May 30, 2020, in Louisville, Ky. The window was broken Friday evening during a protest over the deaths of George Floyd and Breonna Taylor. (AP Photo/Darron Cummings)

Jim Segal, who bought the surplus store 20 years ago, said he sent his staff home and locked the storefront while continuing to work in the back office Thursday. That’s when he heard glass windows shatter and called 911. Rioters broke glass display cases and ran out with electronics.

"Luckily, I have a steel door because they were trying to enter the office," Segal told USA Today. "I don't think they knew anybody was in there, but I basically barricaded myself within a bathroom inside the office."

Despite the recommendation, Segal said he hired a crew to board up the storefront later in the day, but upon arriving, they refused to work in the crowd of protesters. After the crowd tried to snatch his phone from him, Segal said he retreated to his car, where he waited for hours watching rioters urinate in his store and make out with items, including DVDs and a snow-blower.

Combined with the economic downturn caused by the coronavirus pandemic, Segal feared he will have to close permanently if he can’t make up for spring sales, possibly laying off all 10 employees.

A worker vacuums broken glass from storefront in downtown Louisville, Ky. , Saturday, May 30, 2020. The store was damaged Friday evening during a protest over the deaths of George Floyd and Breonna Taylor. (AP Photo/Darron Cummings)

Cities across the nation have faced days of protests and rioting, with officials fearing members of Antifa, a militant anarchist group, have been coming from out of town to evoke violence and chaos, rather than communicate a message about police brutality in the black community.

“A lot of people don’t know the blood, sweat and tears that go into being a business owner and the type of sacrifices we had to go through to be where we’re at right now,” Kris Shelby, the manager of Attom, a luxury Atlanta clothing store, told the New York Times.

Shelby, who helped open the business in 2016, said he heard gunfire from his nearby apartment over the weekend. When he returned to the store the next morning, he said he found most of the merchandise was gone and videos found on social media showed masked rioters of all races running out of the business with hundreds of dollars’ worth of accessories and clothing.

While larger chains, such as the Target store seen completely destroyed in the Minneapolis rioting, have multimillion-dollar corporations to back them up, smaller business owners said they feared whether their insurance would even cover their claims.

Other immigrant business owners said they did not have quality insurance plans and had already been struggling to remain afloat after stay-at-home order hurt profits for months.