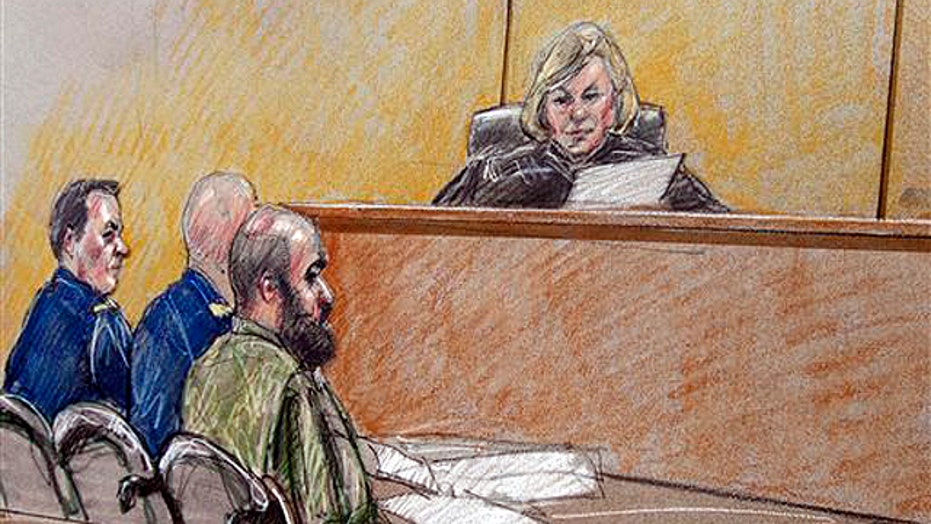 Nidal Hassan will represent himself in court

Maj. Nidal Hasan, who is serving as his own attorney, didn't take notes or confer with his former defense attorneys who will help if he asks. During the nearly two-hour proceeding with the first group of 20 potential jurors, Hasan sat quietly in his wheelchair as the judge gave preliminary instructions and read about 300 witness names to find out if any of the Army officers knew them.

Maj. Larry Downend, one of the prosecutors, asked the group if they agreed that the defendant's choice of weapon and a motive could show premeditation. Everyone in the group nodded yes.

All officers indicated they had no moral opposition to imposing a death sentence, but also said they didn't believe execution was the only punishment for someone convicted of premeditated murder.

After the group from Army posts nationwide was questioned by the judge and prosecutors, Hasan said he had no questions for the jury pool.

Six potential jurors were dismissed at prosecutors' request, based on some of their answers in court Tuesday and to the lengthy jury questionnaires they turned in weeks ago. One officer said he knew one of the 13 killed on Nov. 5, 2009.

The judge, Col. Tara Osborn, told the group that Hasan was wearing a camouflage uniform worn by troops in combat instead of a dress uniform -- usually worn by defendants in a court-martial -- because it better meets his health-related needs as a paraplegic. Hasan was paralyzed from the abdomen down after being shot by police the day of the rampage.

Osborn told potential jurors not to hold his type of uniform against him.

At a hearing earlier Tuesday, Hasan said he wanted jurors to know that he was being forced to wear a uniform that he believes represents "an enemy of Islam." Hasan, an American-born Muslim, had said he didn't want to wear either military uniform.

Before jury selection began, Osborn told Hasan that she would not relay that to the jury pool but that he could during his questioning.

Osborn also told the group that Hasan was wearing a beard for his religious beliefs and not to hold it against him. Although facial hair violates Army rules, Hasan started growing a beard last summer, saying it was required by his Muslim faith.

The judge said security measures at the courthouse were "for all trial participants" and told jurors not to consider that as any evidence in the case.

The one-story courthouse on the edge of the Texas Army post is surrounded by hundreds of stacked freight car-size shipping containers, and by tall dirt- and sand-filled barriers designed to protect it against the impact of a bomb blast. Armed soldiers stand guard around the building.

Individual questioning of potential jurors was to start Wednesday. Jury selection is expected to last at least a month.

Groups of 20 will be brought in each week until 13 jurors are chosen for Hasan's trial. The initial jury pool was 140 officers, but because of several trial delays, some have left the military through retirement or their service ending, Fort Hood officials said. It's unclear how many potential jurors remain.

Death-penalty cases in the military require at least 12 jury members, more than in other cases. And unlike other trials, their verdict must be unanimous in finding guilt or assessing a sentence.