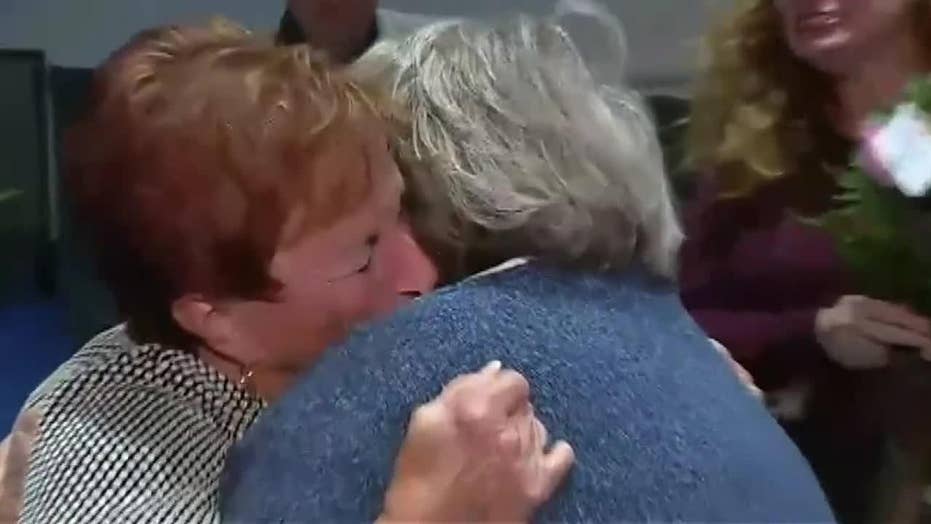 Raw video: Jackie Murphy finally met her sister Suzan Baekkelund for the first time in 75 years at the Metropolitan Airport.

Two sisters, unaware the other existed for their entire lives, met for the first time in 75 years thanks to a well-timed DNA kit.

Suzan Baekkelund, 76, flew to Detroit Metropolitan Airport from Nashville on Thursday to reunite with 80-year-old Jackie Murphy, her long-lost sister.

Their mother had raised three children, including Jackie, but she was unable to give adequate care for Suzan due to her young age and was forced to give her up for adoption, according to Fox 2 Detroit.

Suzan was never told she was adopted and only found out after her daughter Inga did a DNA test and sent it in. Around the same time, Jackie's cousin was also doing an Ancestry test with her mother to look up their ancestors.

That's when both parties started to put the pieces together about having a missing relative.

"A green flag goes up of some sort and says there is someone in your family that matches your DNA," Jackie told Fox 2 Detroit. "They pursued it, and they knew it wasn't my aunts. The only person left was my mother. They called me and wanted to see if I knew of a daughter that was adopted out, that she was born in Michigan. The last name that was given to my mother of the adoptive parents was Trotter.

"So my cousin called and said we have someone in our ancestry that belongs on the Stevenson side of the family. A little girl was adopted out, do you know of anyone in the family? Instantly I knew they were talking about my mother. They asked if I would like to talk to her and I said I would love to," she added.

Jackie was still skeptical about having a long-lost sister until she asked Suzan what her middle initial was, knowing her maiden name started with the letter T. Jackie told the outlet that when Suzan said her middle name was Trotter, she knew it was for real.

"I love her and I don't even know her. But I loved her all my life because I knew she was there," Jackie said before Suzan's plane from Nashville was set to arrive at the airport. "We have a big family waiting for her."

When they reunited and saw each other for the very first time, Suzan asked to take a closer look at Jackie and remarked on how similar they were.

"I love you," Jackie said, according to the outlet.

As they embraced, the sisters wondered what their mother would say about them being together.

Now the only question is what they'll do with all the time they have to finally catch up.