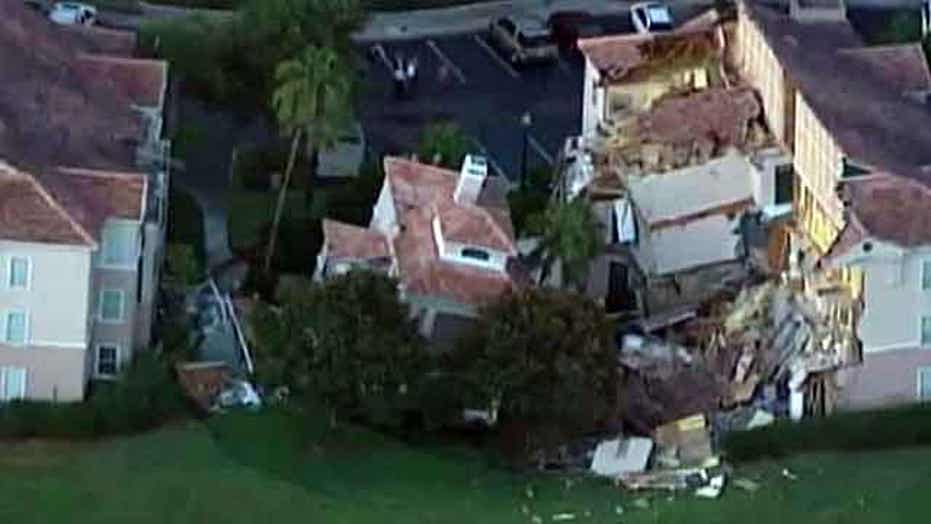 A sinkhole estimated to be 40 to 50 feet in diameter caused a section of a central Florida resort villa to partially collapse early Monday, while another section of the villa was sinking, authorities say.

Residents of the Summer Bay Resort in Clermont, about 10 miles west of Disney World, called 911 shortly before midnight Sunday to report loud creaking noises and breaking windows, according to MyFoxOrlando.com. Firefighters then evacuated the building.

The development's president, Paul Caldwell, said the resort underwent geological testing when it was built about 15 years ago, showing the ground to be stable, and that there were no signs before Sunday that a sinkhole was developing. He said all affected guests had been given other rooms.

Caldwell said a window popped in one of the rooms about 10:30 p.m. Sunday. A woman ran outside and flagged down a security guard, who notified management. Another window then popped and a decision was made to immediately evacuate the building, Caldwell said. The process took 10 to 15 minutes, he said.

The section of the building sank into the ground over the next five hours, said Amy Jedele, a resort guest who was staying with her fiance, Darren Gade, in a building about 100 yards away. Residents who had been inside the building described hearing what sounded like thunder and then the sound of water, as if it were a thunderstorm, she said.

The first portions to sink were the walkways and the elevator shaft, Gade said.

Authorities think the sinkhole is getting deeper but couldn't tell early Monday if it was growing outward, Cuellar said. County inspectors were expected to assess the damage throughout the day.

The villa houses 24 units and about 20 people were staying in it at the time, Cuellar said. All of the residents have been accounted for.

But Caldwell said 48 three-story units are a total loss.

A nearby villa was also evacuated as a precaution, Cuellar said, adding that there was a gas leak but the gas has since been shut off.

Luis Perez, who was staying at a villa near the sinking one, said he was in his room when the lights went off around 11:30 p.m. He said he was on his way to the front desk to report the outage when he saw firefighters and police outside.

Maggie Ghamry, a guest at the resort, said that when she first heard shaking and glass breaking, she thought it might be kids running down the hall.

Summer Bay is described on its website as a luxury resort with condominiums, two-bedroom villas and vacation houses in addition to standard rooms. The site touts a clubhouse, atrium and poolside bar, and says the resort is on a secluded 64-acre lake.

Florida has a long and ongoing problem with sinkholes, which cause millions of dollars in damage in the state annually. On March 1, a sinkhole underneath a house in Seffner, about 60 miles southwest of the Summer Bay Resort, swallowed a man who was in his bed. His body was never recovered.

But such fatalities and injuries are rare and most sinkholes are small. Sinkholes can develop quickly or slowly over time.

They are caused by Florida's geology -- the state sits on limestone, a porous rock that easily dissolves in water, with a layer of clay on top. The clay is thicker in some locations making them even more prone to sinkholes.

Other states sit atop limestone in a similar way, but Florida has additional factors like extreme weather, development, aquifer pumping and construction.