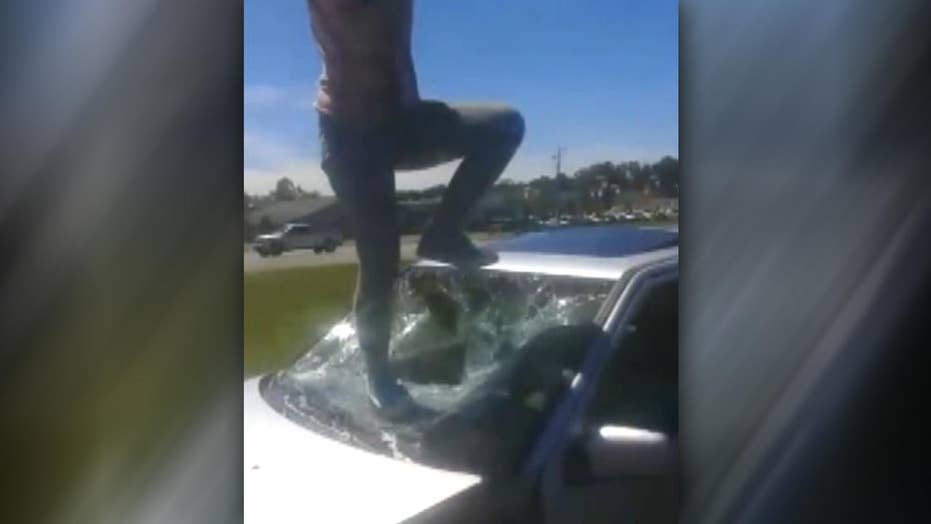 An Alabama woman was arrested on Monday after police say she attacked a man's car in an alleged love triangle gone wrong.

Shocking video obtained by WBMA shows a woman standing on Nick Myrick's vehicle and stomping on the windshield.

The alleged spurned lover, Barbara Lowery, said it was kind of a spur-of-the-moment move.

"I prayed about it first," she told WBMA, "and I slept on it, and I decided it wasn't a good idea. Then I saw a shovel."

The 24-year-old said she got on top of the vehicle after the shovel wasn't "doing the job."

Lowery, who didn't reveal a motive for her behavior, is also accused of using Sharpie on the car.

A source told the station that Lowery's actions were over a love triangle that went awry. The source said the victim wasn't cheating and he believed that the two were friends.

Lowery explained that she is "not trying to give out his personal business like that."

Police arrested Lowery for disorderly conduct, and the furniture store put out a trespassing warning to keep her from returning, according to WBMA.

Lowery said, "I already knew going into it that I would have to face some consequences, and you know it kind of sucks, but like I said I prayed about it and stuff, and I did it anyway."

Scott Sams took video of the Monday incident and offered to get Myrick a new windshield, according to the Cullman Times.

Myrick told the newspaper, "The car was originally my granddad's and he had given it to my dad, who passed away last July. Then my granddad passed away just a few weeks ago. The car means a lot to me."

The windshield has been fixed, WBMA said.