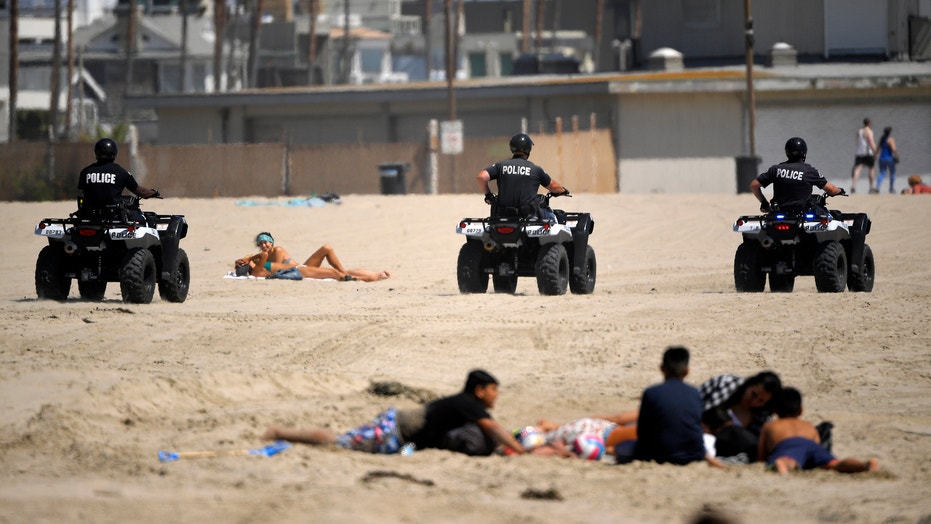 Los Angeles County beaches will close to the public during the Fourth of July weekend to limit the spread of COVID-19, but the county sheriff announced Monday his department won't enforce the closure order, according to a report.

The Los Angeles County Department of Public Health announced the order on Monday which will close the beaches for all recreational activities -- as well as prohibit fireworks displays to deter large crowds. L.A. County Sheriff Alex Villanueva said his department wasn't consulted on that order and they will only enforce parking lots and traffic on the Pacific Coast Highway (PCH).

"We were not consulted on the beach closure, and will only assist our beach cities in closing parking lots and traffic enforcement on PCH," Villanueva told Fox 11. "In regards to enforcing the beach closure, we will not be enforcing it because we are 'Care First, Jail Last.'"

The department announced more than 2,900 new cases of COVID-19 on Monday, which it said was "the single largest one-day case count since the pandemic began."

The order will include "all public beaches, piers, public beach parking lots, beach bike paths that traverse that sanded portion of the beach, and beach access points."

Los Angeles police officers patrol Venice Beach during the coronavirus outbreak in Los Angeles on May 13, 2020. The Los Angeles County Department of Public Health is ordering L.A. County beaches closed from July 3 through July 6 at 5:00 a.m. to prevent dangerous crowding that results in the spread of deadly COVID-19. (AP Photo/Mark J. Terrill, File)

“Closing the beaches and prohibiting fireworks displays during this important summer holiday weekend was an incredibly difficult decision to make, but it’s the responsible decision to protect public health and protect our residents from a deadly virus," said Barbara Ferrer, Los Angeles County director of Public Health.

Ferrer attributed the increase in coronavirus cases to the likely result of more people being out of their homes as sectors of the economy reopened -- including restaurants and shopping malls, the station reported.

Meanwhile, the Lost Hills Sheriff's Station announced on Facebook Monday that it will be patrolling the beaches throughout the Fourth of July weekend.

"This new order makes it illegal to trespass at these locations and is punishable by law to include, but not limited to, a $1,000 fine," the department said.