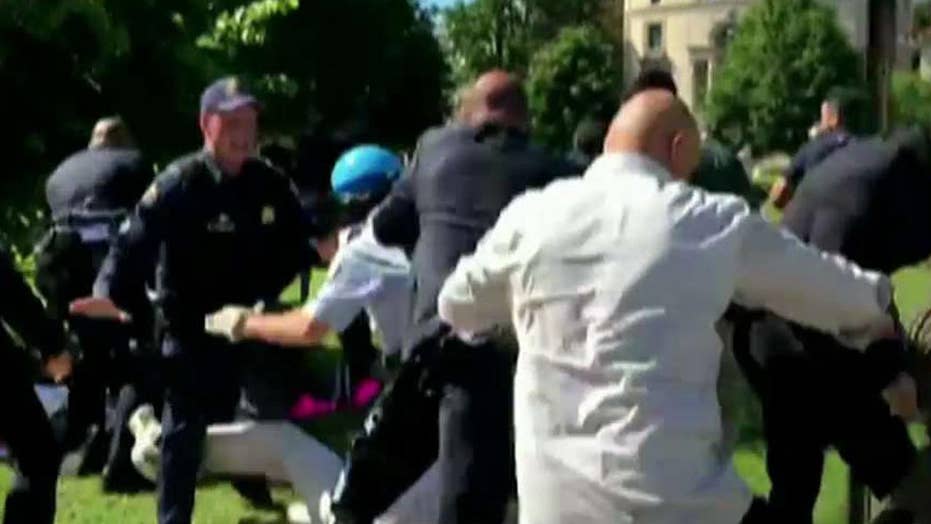 The Secret Service announced Wednesday that it is investigating what one official called a “brutal attack on peaceful protesters” in Washington, D.C., on Tuesday by Turkish President Erdogan’s security detail.

The attack that sent nine to the hospital appeared to be unprovoked, Peter Newsham, the D.C. police chief, said. The Wall Street Journal reported that one police officer and two Secret Service officers were injured in the melee.

Attacking the small group of protesters with their fists and feet, men in dark suits and others were recorded repeatedly kicking one woman as she lay curled on a sidewalk. Another wrenches a woman's neck and throws her to the ground. A man with a bullhorn is repeatedly kicked in the face.

A Voice of America video showed police officers struggling to protect the protesters and ordering the men in suits to retreat. Instead, several of the men dodge the officers and run into the park to continue the attacks.

The clash happened at the Turkish ambassador's residence Tuesday as Erdogan arrived after a White House meeting with President Trump.

Turkey's official Anadolu news agency labeled the protesters Kurdish "supporters of terror." It said they chanted anti-Erdogan slogans, and that Erdogan's team moved in to disperse them because "police did not heed to Turkish demands to intervene."

In a statement, the Turkish Embassy blamed the violence on the demonstrators, saying they were "aggressively provoking Turkish-American citizens who had peacefully assembled to greet the President. The Turkish-Americans responded in self-defense and one of them was seriously injured."

Politicians weighed in as well. D.C. Mayor Muriel Bowser called it a "violent attack on a peaceful demonstration," and said it "is an affront to DC values and our rights as Americans."

"This is the United States of America. We do not do this here," Sen. John McCain commented while retweeting the video. "There is no excuse for this kind of thuggish behavior."

The State Department and D.C. police are also looking into the incident.