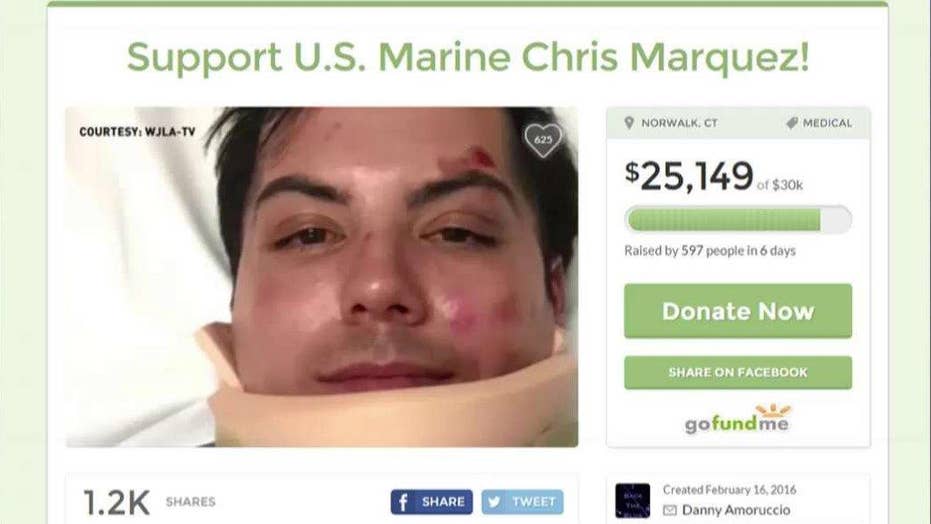 Donations pour in for veteran attacked at McDonald's

Sgt. Christopher Marquez discusses the support he has received

Decorated former Marine Chris Marquez wasn’t the only Iraq War vet brutally beaten in an attack on Feb. 12 in Washington.

Not far from where Marquez was assaulted on that frigid night, 35-year-old Michael Schroeder, also a Marine, was dragged between two cars in the Glover Park neighborhood and brutally beaten, his family told WUSA9. Police found him face down with his head beaten up and his cash missing.

Authorities were notified after a man and his son in a taxi saw Schroeder on the ground.

Schroeder was diagnosed with a fractured skill and a severe concussion. His family told WUSA9 Schroeder received staples in his head and could hardly speak to them in the hospital.

He said he didn’t know why the incident took place because he was “just trying to walk home.” Investigators said it was unrelated to the attack on Marquez.

Schroeder said the last thing he remembers was leaving his friends to walk home after a night of drinking and then ambulance lights. WUSA9 reported surveillance footage shows him near Wisconsin Avenue NW before 2 a.m. and him cutting through a parking lot near 37th Street NW.

Schroeder’s twin brother, who is also a Marine, told WUSA9 there’s “zero reason” for the attack to have occurred.

Marquez, 30, who is one of two Marines depicted carrying then-1st Sgt. Bradley Kasal out of the so-called "Hell House" in a famous photograph, was assaulted at a McDonald’s after he was finished eating. Marquez told the Washington Post a group of teens and young men approached his table and asked him if he “believed black lives matter.”

At that point, Marquez said he ignored the group and left the McDonald’s but was knocked unconscious by a blow to his head. When he came to, his pants were ripped and his wallet, which contained $400 in cash, three credit cards and VA medical card among other items, was missing.

The teens at that point mugged him and used his credit cards for more than $115 in liquor, Five Guys burgers and a Walmart purchase, according to The Daily Caller.

A witness claimed Marquez had used a racial slur before the attack, Fox 5 reports. Marquez denied it.

Police have not named a suspect in Schroeder’s assault.

A GoFundMe page has been created to help Schroeder pay for his medical expenses. The family said any extra funds will be donated to the Recon and Sniper Foundation, WUSA9 reported.