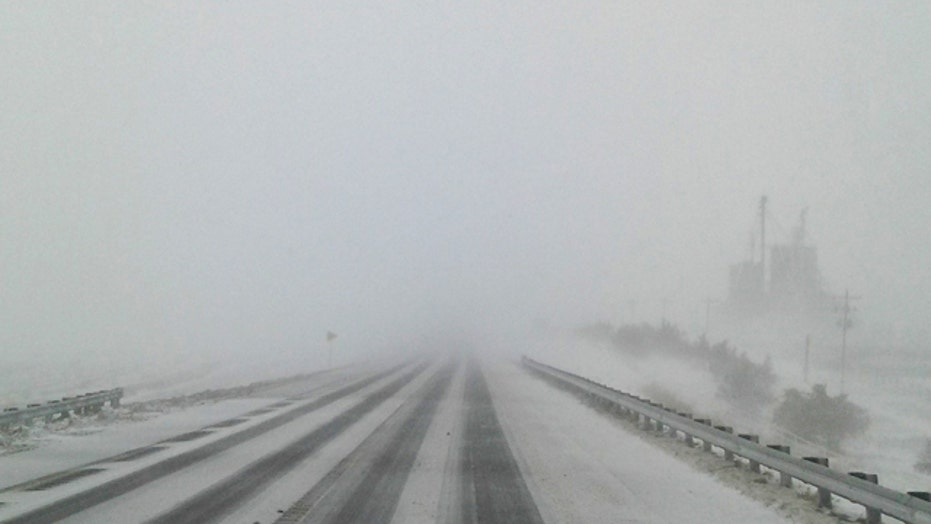 DODGE CITY, Kan. – The nation's midsection again dealt with blizzard conditions Monday, closing highways, knocking out power to thousands in Texas and Oklahoma and even bringing hurricane-force winds to the Texas Panhandle. Two people have died.

Already under a deep snowpack from last week's storm, Kansas was preparing for another round of heavy snow Monday evening and overnight, prompting some to wonder what it could do for the drought.

"Is it a drought-buster? Absolutely not," National Weather Service meteorologist Victor Murphy said. "Will it bring short-term improvement? Yes."

The storm is being blamed for two deaths on Monday. In northwest Kansas, a 21-year-old man's SUV hit an icy patch on Interstate 70 and overturned. And in the northwest town of Woodward, Okla., heavy snow caused a roof to collapse, killing one inside the home.

Blizzard warnings extended from the Oklahoma and Texas panhandles into south-central Kansas. To the east, lines of thunderstorms crossed Arkansas, Louisiana and Florida, bringing heavy rain and an occasional tornado warning.

As many as 10,000 people lost power in Oklahoma, as did thousands more in Texas.

"I have a gas cooking stove and got the oven going," said Ann Smith, owner of the Standifer House Bed and Breakfast in Elk City, Okla., late Monday afternoon. Her daughter and grandchildren had come over because they lost power.

"If it gets cold tonight, I guess we'll have to put pallets in the kitchen," Smith said with a laugh.

Colorado and New Mexico were the first to see the system Sunday night, with up to two feet falling in the foothills west of Denver.

As it moved into the Texas and Oklahoma panhandles Monday, the storm ground travel to a halt, closing miles of interstates and state highways.

Texas Department of Public Safety Trooper Daniel Hawthorne said about a dozen motorists had to be rescued, but no one was injured. The National Weather Service in Lubbock reported at one point that as many as 100 vehicles were at a standstill on Interstate 27.

Extremely strong winds whipped around at least a foot or more of snow in the Texas Panhandle, and a hurricane-force gust of 75 mph was recorded at the Amarillo airport. Amarillo recorded the biggest snowfall total in Texas -- 19 inches, just short of the record of 19.3 -- while Fritch was second with 16.

The Oklahoma Highway Patrol closed all highways in the Panhandle and much of the state's northwest because of blizzard conditions. Trooper Betsy Randolph said several dozen motorists have reported being stranded or have abandoned their vehicles.

Chris McBee, a storm chaser, got stuck outside Woodward in northwest Oklahoma in the mid-afternoon. By then, the city was leading Oklahoma's snow totals with 15 inches of snow.

"We were planning to go back to Oklahoma City tonight, but the road was just impassable,"McBee told The Associated Press. "You couldn't see 50 feet in front of you." A man with a bulldozer dug out McBee's vehicle.

"He's just helping people," McBee said, adding he assumed the man was still out there. "We tried to pay him and he refused."

While the wintry precipitation is "a shot in the arm," National Drought Mitigation Center climatologist Mark Svoboda said, the drought in the Plains and Midwest is far from over. Svoboda, speaking from Lincoln, Neb., said 12 inches of snow is equivalent to about 1 inch of rain.

"We would need 2-4 feet of snow to just erase the October to present deficits," in Kansas, he said.

Jim Shroyer, a wheat specialist with Kansas State University Extension, said snow is more efficient than summer rain in replenishing soil moistures because rain tends to run off or evaporate during the summer months.

But it can take months or years for pastures and rangeland to recover to the point where there is good forage there for livestock.

"There is a lag coming out of drought where some of these impacts will linger on long after `climatological drought' is gone," Svoboda said. "And there is always a sense of false security there."

Texas rancher Jay O'Brien warned the storm could be deadly for grazing cattle, with the wind pushing animals into a fenced corner where they could suffocate from the drifts.

"This type of snow is a cattle-killer," he said.

Parts of Kansas are bracing for anywhere from 8 to 24 inches of snow as the system moves through the state overnight. Wichita figures to take another hit after last week's storm that dumped about a foot and a half of snow.

In preparation, many Kansas school districts already have called off Tuesday classes, as has the University of Missouri-Columbia. And Kansas City, Mo., Mayor Sly James declared a state of emergency Monday, as another a foot or more could fall on last week's 10 or so inches.

"This one has the potential to be quite serious," James said at a news conference.

Through the day Tuesday, the storm is forecast to spin toward the upper Midwest, bringing snow to Chicago and eventually Detroit before heading toward Buffalo, N.Y, and northern New England in the middle of the week.