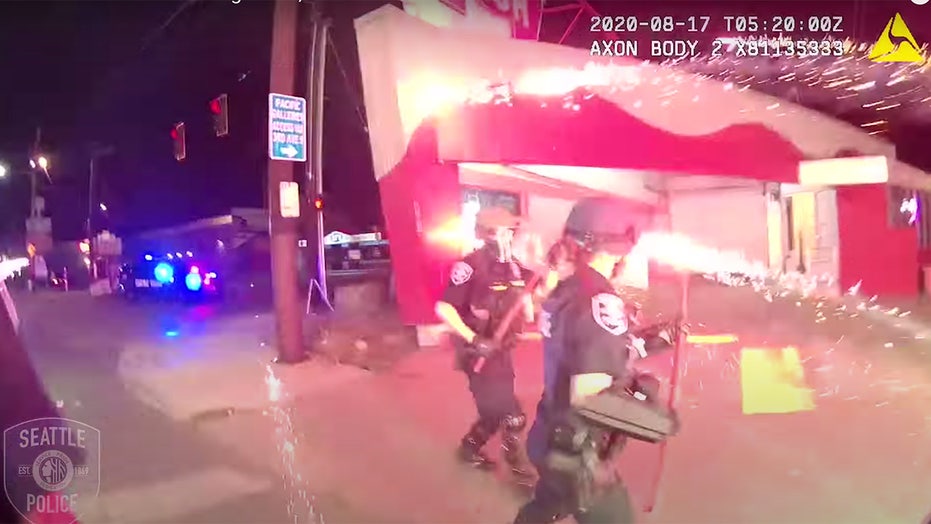 Seattle police officers recently had fireworks thrown at them and even fires set in department buildings by rioters who allegedly cemented the doors shut around the same time, recently released information from police and video footage shows.

The Seattle Police Department released body camera footage on Wednesday showing officers being repeatedly hit with fireworks that were allegedly being thrown by rioters on Aug. 16 and 17 in the SoDo neighborhood of the Washington state city, police said.

Just one day earlier, the department said police were attacked by protesters who broke windows, scrawled graffiti and threw objects at its West Precinct on Monday night before moving to the East Precinct.

There, they started a fire next to the building and “placed quick-drying cement in exterior precinct door locks,” police said, in an alleged attempt to prevent the officers from being able to get out, according to local KOMO News.

“They mixed up the ‘Quikrete’ and then tried to seal off the exits,” Seattle PD Sgt. Randy Huserik told the outlet. “I don’t think there’s a lot of leaps that have to be made about what their intent was.”

KRISTI NOEM FIRES BACK AT SEATTLE MAYOR: FAMILIES THERE ARE 'UNDER ATTACK' DUE TO 'LACK OF LEADERSHIP'

Huserik rejected the idea that this was a protest or a demonstration and called it “a directed attack against the police,” according to KOMO.

Police have arrested one person in connection with Monday night’s fire and “Quikrete” attack, police said. At least one officer was hurt, though no condition was provided.

“The entirety of the uniform patrol of the Seattle Police Department was committed to what was going on at the East Precinct,” Huserik told to KOMO. “If you had called 911, no one would have responded.”